I had last Tuesday off so I thought a steady run using the two bridges route would be nice. I don’t know if you’ve run it before but it’s nearly all off-road as you head out to Avonmouth, cross over the river using the M5 bridge, then head back to Bristol again along the tow path. It’s about half marathon distance.

The only problem is there are no short cuts, unless you fancy a swim across the Avon! It was extremely hot that day and I just wanted to get home fast. Even with a full Camelbak I soon ran out of fluids and had a long, thirsty run back home. My treat was an ice cream in Westbury, the best tasting ice cream ever!

Last weekend was the very last EA30. To make it that little bit special a large group of Harriers headed off to Aztec West, near Bradley Stoke, with the goal to run as many laps as possible of the business park in 30 minutes. The group then enjoyed a sunny picnic, combined with birthday celebrations for Sarah Andrews.

We were particularly honoured to have a special VIP guest in attendance as well. Coach, mentor, IT wizard and EA30 subject matter expert Valerie Hughes joined us to run a few laps of Aztec. Special thanks also to Sandra’s husband, Alex Williams who took pictures and drone footage of the event. 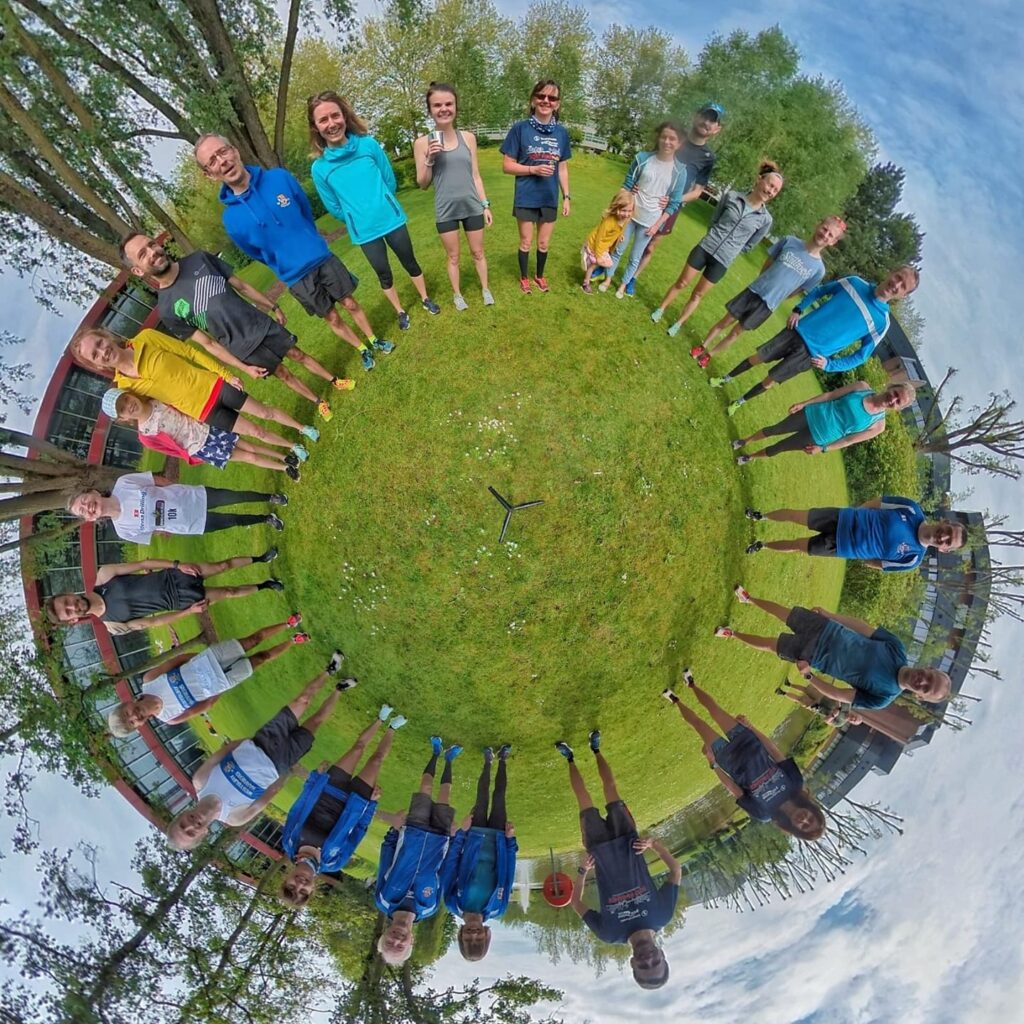 Above, the group before and after their 30 minute dash around Aztec West 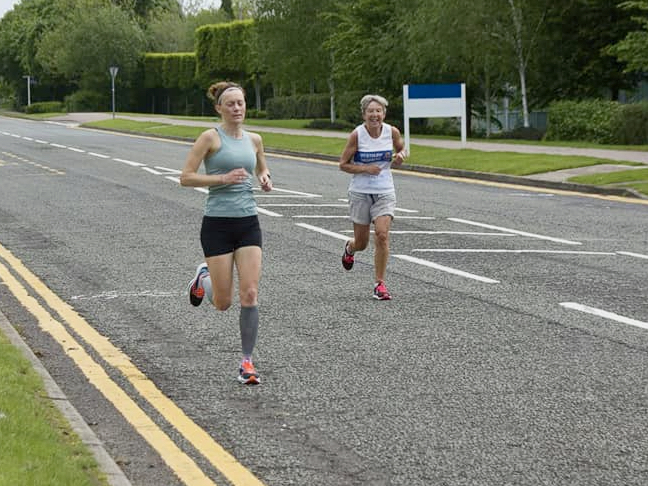 Above: Valerie Hughes storms past Vicky for her final EA30 challenge (or it could possibly been the other way around, who knows)!

Quick recap below of the runners so far. Next up is James Bardwell 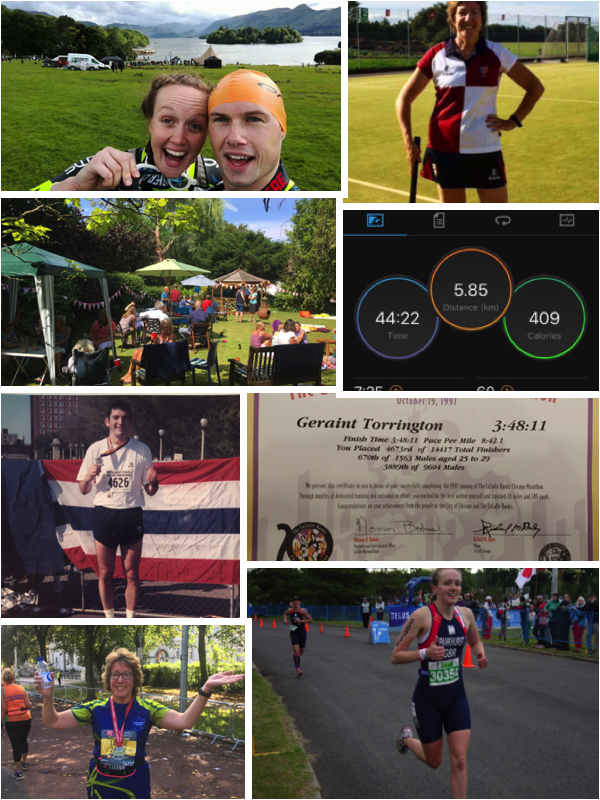 Club Supper at the Black Swan

With some warmer weather to look forward to it should be very nice to sit outside the Black Swan on Thursday 24th June, post intervals, at 8:15pm. Lou has booked three tables this time and maybe, just maybe, with food “being served to table” at £7.50 per head, BUT this will depend on what’s happening on 21st June reference restrictions. So please “save the date” and comment to the facebook posting on 5th June if you’d like to join. Further details will follow.

A big round of applause please for Steve Emery, our senior MotM winner for June.  Steve won this month for his impressive charity run for Prostate Cancer UK. Steve ran just over 200 miles in April as part of his Massive Miles Challenge. Steve also trains regularly with the club and clocked-up some very impressive EA30 distances around Aztec West. And good luck to Steve running the Cheddar Trail Marathon next weekend. He’s promised me it’s a guaranteed win so I’m heading off to Ladbrokes to place a bet. Don’t let me down Steve, my life savings are in your hands, or perhaps I should say legs! 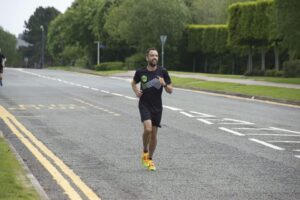 The junior winner is Alexander Wilson. Alexander was nominated for his impressive debut at the steeplechase. This 5 lap event is especially challenging with a high barrier to leap over and a very deep water jump to negotiate. Alex scored maximum points for his team, quite a feat when you consider this was his first attempt at the event.

Kay is looking for an additional volunteer to provide her with support for the Westbury Wipeout held on the evening of Monday 5th July. If interested please respond via this e-mail and I’ll pass on your details to Kay.

The event itself is also now open for entries. Details of which can be found on the Run Britain website, a link of which is below. https://www.runbritain.com/entries/EnterRace.aspx?evid=78b406c85955&erid=7abe0ecc596d

The organisers of this years Cotswold Relay are looking for volunteers to act as marshals along the course. The race is being held on Saturday 3rd July. If you would like to support this event, please let me know. I’ll then pass on your details to Eithne who is organising the clubs entry.

I believe Eithne is also looking for some relay runners to act as reserves. Again, if you are interested in being a reserve then I’ll pass on your details.

It looks as if Josh Morland is on his holidays this week, although that’s not prevented him for gaining a 9th place overall on Strava segment ‘Pond to park’ in a time of 1:52. This segment is on the coast of Wales, not too far from Porthcawl.

Saturday 12th June and Sunday 13th June. The Cheddar Challenge and Omnium by Relish Running Events. A whole range of different events over the weekend and you can do as many or as few as you like. There’s the traditional 10km, Half and Marathon but also hill climbs, sprints and a few fun runs.  https://www.relishrunningraces.com/cheddar-gorge-challenge.php

Wednesday 7th July 19:30: Bitton Road Runners 5k Series Race 1. We are pleased to announce that the 5K series will return this year for a 3 race series.

All races start at 19:30 from Bitton Railway Station. Entries will open for the first race on 21st June and will be made online through Race Nation capped at 95 runners.  Other dates include 7th July, 4th Aug, 1st Sept.