These words have been taken from The Westbury Harriers 75th Anniversary Club History Book, compiled by our late President Peter Griffin.

Athletics started seriously in Bristol in 1882 with the formation of Bristol Athletic Club, but it was as early as in the turn of the century that those living in the village of Westbury-on-Trym found traveling into Bristol difficult and Home fixtures seemed like Away fixtures by the time they arrived.  Even in the early 20’s, the village was completely isolated and surrounded by fields, and after leaving Chock Lane there was hardly a house or cottage to be seen until arriving at Manor Farm (now Horfield Common when travelling East).

The local lads, therefore, used to train together and run through the village streets.  A Club photograph taken as early as 1913 shows the proud village members with W H on their vests so that they could be distinguished from the others.  As GEORGE PYKE (85) recalled – if you had two good legs it was your duty to run, and they did.  The Cobbler – ARTHUR FISHER, the Postman – BILL CARNELL, the Milkmen – BILLY SMITH and TED LOVE; yes, and even the Curate –‘TROOPER’ BARTLETT (clad in shorts and clerical collar) were regular members of the village pack.

Under the guidance of ALBERT ‘NOBBY’ CLARK (senior) they trained regularly, using an old Pavilion/Summer House on the lawn behind the ‘White Lion Hotel’ as a Changing Room.  The whole area is today the Car Park, and their washing facilities used to consist of a tin bath of water, luke-warm if they were lucky.

It was in 1924 that a 40 year old veteran member called GILBERT WALKER thought it would be a good idea if the village boys were to form their own Club.  He decided to call a meeting for anyone interested and booked a room at the ‘White Lion Hotel’ for a Friday night. 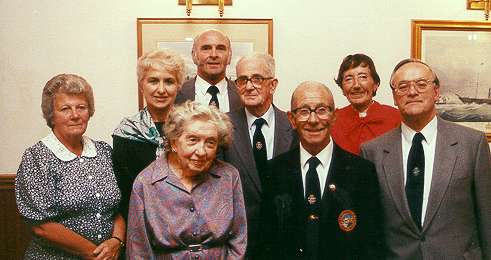 The following is an extract from the first Minute Book:
“At a meeting of sportsmen at the ‘White Lion Hotel’, Westbury, Feb. 8th 1924, it was proposed by Mr. P. Ubank, seconded by Mr. Busby that a Harriers Club be formed and that it should be called “Westbury Harriers” carried unanimously.

The following officers were elected “pro-term”:

After carefully considering the different points raised over this it was seconded by Mr. W. Ritchings and carried unanimously.  Several details were given in a speech by the Chairman, on the best way to carry on.  Points of his own experience were given and if carried out should be of great benefit to the Junior Section of the Club.

Other matters were thrashed out in detail and when the meeting closed it was felt by all present that the Club was going to be a huge success. Proposed that the Minutes be accepted Mr. G. Pyke, seconded Mr. Busby carried.”

It is interesting to note that ‘The White Lion Hotel’ was originally an old Inn and Posting Station in whose courtyard it was customary for the local lads to settle their disputes in the old-fashioned way, with their coats off and their sleeves rolled up. Surrounded by their partisans, cheered on and well primed with ‘Dutch courage’ they would set to in right earnest, and usually in consequence, as disturbers of the peace, they would be hauled off to spend an uncomfortable night in ‘The Cooler’.

Find out about different types of membership, our training sessions and the costs involved here.
Find out more

Keep track of our upcoming events, races, training sessions and much more.
Find out more

Stay up to date with all of the latest Westbury Harriers news and developments here.
Read more