Yesterday I spend the morning watching the Severn Bridge 10km/half marathon over in Chepstow. It was an interesting experience to be on the spectator side of the barrier and not suffering with all the runners. I made good use of my free time and managed to get a few snaps of the runners for both events. Well done to all that participated.

I’ve rather reluctantly had to cancel my Copenhagen Half, firstly because there are no longer flights from Bristol and secondly I’m still rather reluctant to travel aboard. I do enjoy a big city Half so instead I’ve booked up to do the Bristol half on Sunday, 19th September. I’ve never done it before (as it always clashes with Copenhagen), so even though it will be on familiar turf (including the infamous Portway) it will be good to race with fellow Harriers’ and have the support from all the Bristolian spectators.

That’s right, we’re doing a mountain session! Ok, not mountains but some hills on Thursday, instead of our normal running around in circles. We still meet at Coombe Dingle Sports Centre at 7pm but then split into separate groups and head off to our respective hill circuit.

Many thanks to everybody that attended the memorial run for Mary and so kindly baked all those cakes and generously donated to St Peter Hospice.  Photo thanks to Jenny Godden 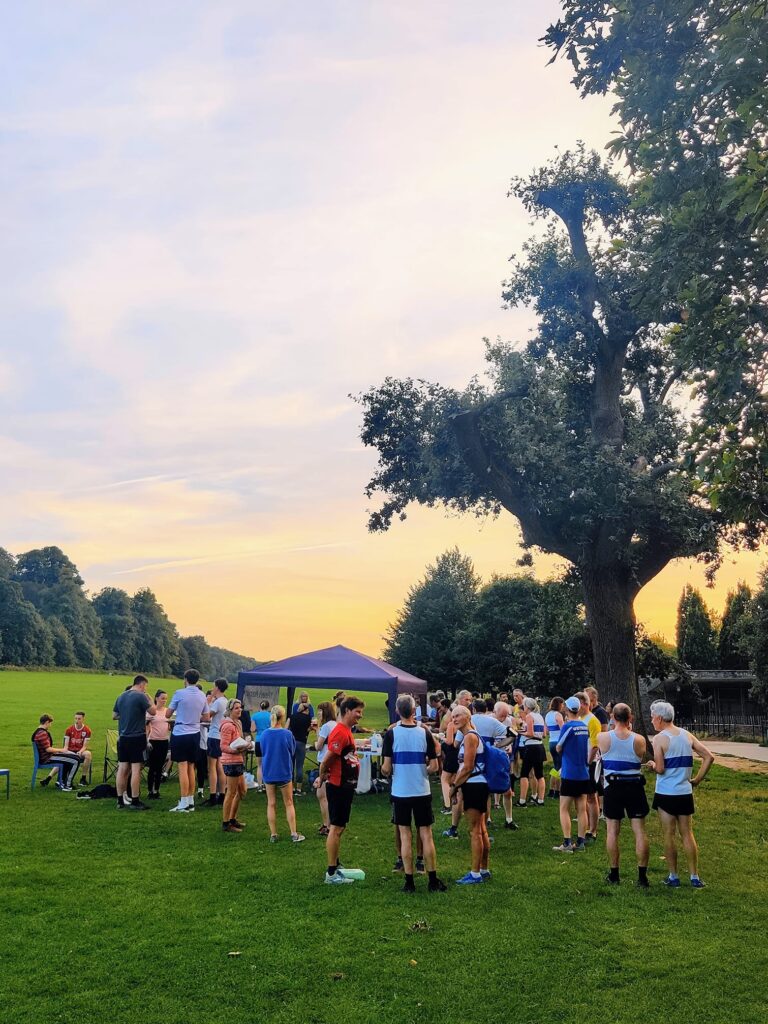 This week we have a special race report from Chris Palmer, detailing his experiences running the Bristol and West South West PB Series. If you are interested in emulating Chris’s performance (or, as in my case, something a lot slower) there are still a handful of places available for the next event on Wednesday 29th September. Link below, https://tinyurl.com/5yhupced

Myself (Chris) and Vicky (Tester) headed to Odd Down cycle circuit on Wednesday evening for race 3 of 4 of Bristol and West’s new 5km (replacing the Pomphrey 5km and before that the Aztec West Fast 5k). The race is 3 and a half laps of the cycle circuit and therefore a fully enclosed traffic free course and with a slight net downhill (within the allowed limit!) to give runners the best chance of a good time.

The race split into 2 on the night and the first slower wave was won in 16:43 (Ed Hanton, Bristol). I was happy with my fastest 5km for many years (17:08) putting this down to some good recent training, good pacing, and potentially my fancy new shoes! (Saucony Endorphin Pro’s). Vicky ran a strong race for 6th women in 19:06 and will be eyeing up a sub 19 in the September race. 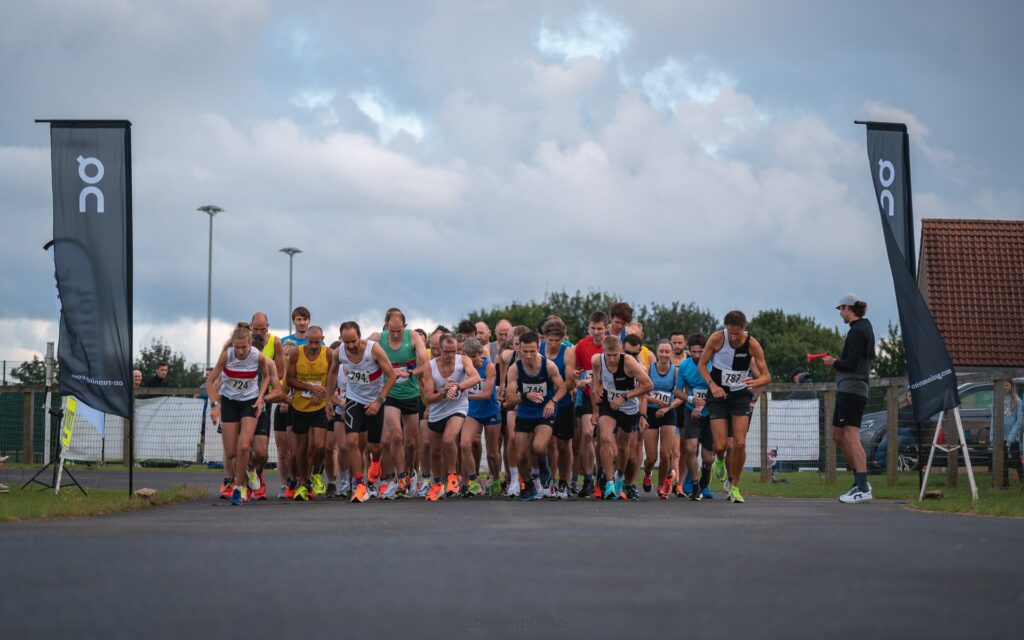 In the faster 2nd race another impressive run from Under 17 Seamus Robinson in 15:48 and not too far off his 15:26 PB. Anthony Glover ran well for 3km until a tight calf forced him to pull out so hope to see Ant back running again very soon. The race was won by Tom Merson (Exmouth) in 14:58 with Daisy Davies (Yeovil) fastest female in 17:06.

Despite the difficult journey across town from West Bristol a worthwhile trip and I would recommend the race to anyone wanting to run quick 5km race. Over half the racers achieved a PB on the night! The last race of this Summer series will be 1 wave at 6:30pm on Wednesday 29th September and good to see lots of Harriers entered. The race was full but opened up some more places on Thursday so worth checking if there are any left.

Editors Note: A the time of writing there remain 8 places available.

Well done to Rhiannon Paton for her international debut, and massive PB, as a member of the Wales junior women’s team in the Inter Area match held within the prestigious Cardiff 5K road race this evening.

Rhiannon and team mates warmed up then made their way to the start of a big, well-organised event. The field included elite runners from all parts of the UK – the first 24 men across the line all ran under 15 minutes, with top Welsh athlete Charlotte Arter 1st woman in 15:29. 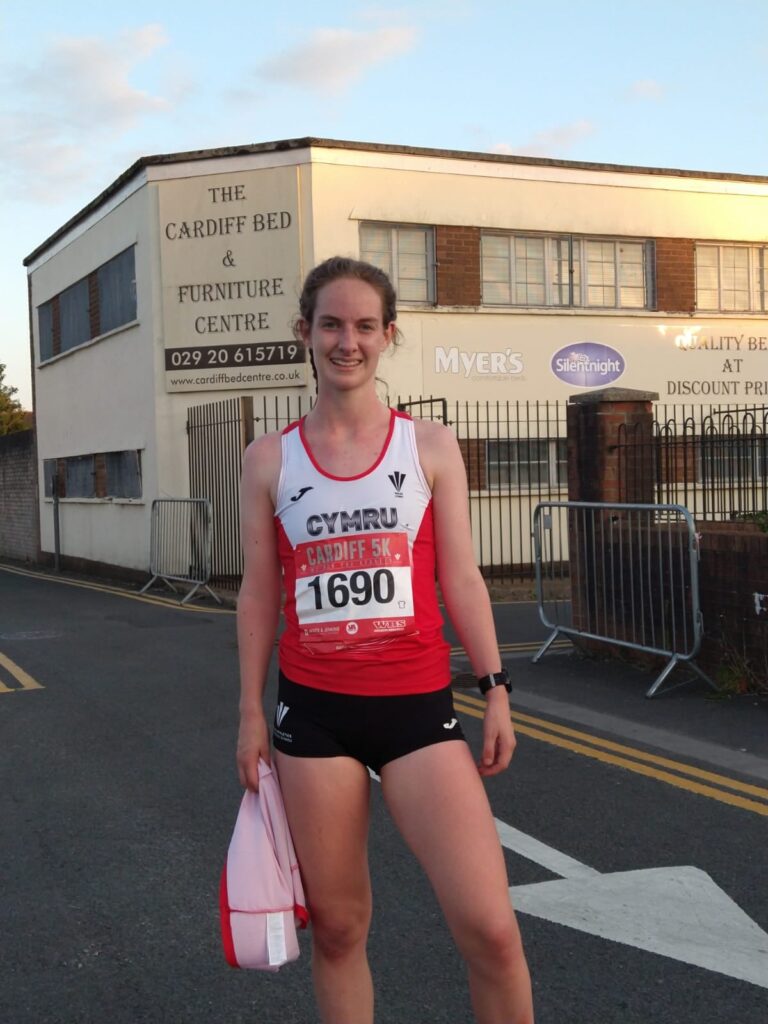 Rhiannon paced her race superbly, getting swept along in the ultra-fast start, digging in hard in the tough third quarter of the race, then unleashing her customary fast finish in the final K to record an official time of 18:36 – which for officially timed road race 5Ks is a PB by nearly 2 minutes, although she went into the race with the aim of running sub-19. 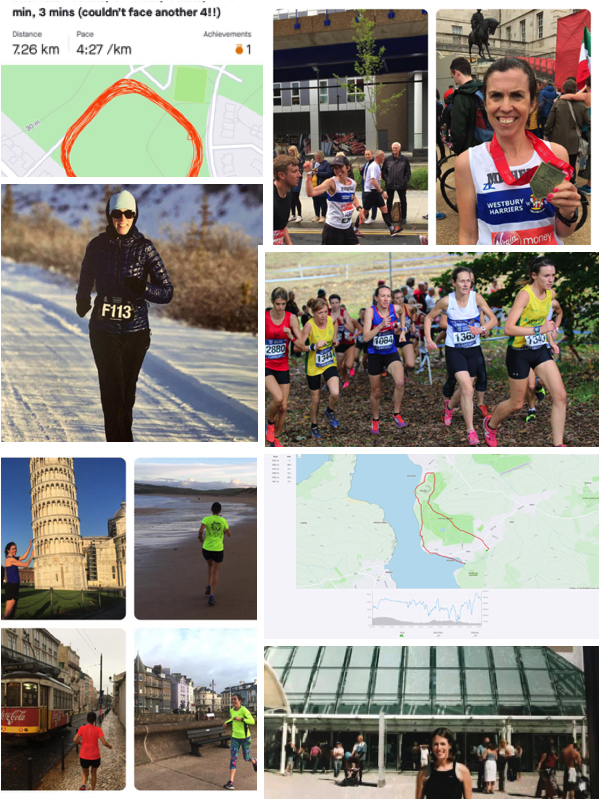 From Monday, 6th September evening training returns to Coombe Dingle. Tamsin has put together some guidance on how it will all work and I shall be sending that out as a separate e-mail later in the week. Do please take the time to read it as it contains some very important guidance.

It’s not easy running across the Severn Bridge. It’s surprisingly hilly (it really does ramp up in the middle) always windy and those long straights just seem to go on for ever. There are also very few spectators to cheer on runners so lot’s of mental determination is require. Therefore all the runners get mentioned in the congratulations section this week including for the 10k, Mike Mewse (V60 2nd place category), Sharon Sayle, Ewan Cameron and Kay Ridgwell (V60 5th place category). In the half marathon, Alex Hamblin (6th place overall), Sophie Voller (5th place category) and Robyn Ellis (7th place category). 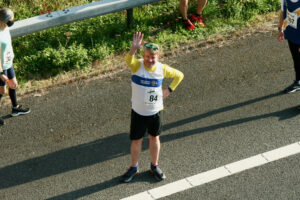 Nyck Mawson had a good run this morning ably supported by Daisy and Lyla on their bikes. A 5km loop around Bradley Stoke result in a PR on Strava segment ‘The Slope’ in a time of 29 seconds.

Wednesday 1st September 19:30: Bitton Road Runners 5k Series. We are pleased to announce that the 5K series will return this year. All races start at 19:30 from Bitton Railway Station.

Sunday 28th November Wiltshire AVR Half Marathon. Has been a club championship event in the past so always popular with the club. http://www.avrwiltshirehalfmarathon.org