Charity Run.  The club charity run will be held in a week’s time on Monday 19th August. This will be in the form of a Hash and will involve following a perplexing route devised by the very fiendish Neil. You will hear the cry’s of ‘On, On’ as we all search for the Cake Baton. It will make a lot more sense on the night but I promise you it has nothing to do with wacky baccy!

Club Championship Event: The Crook Peak Cake Race. Just a reminder that it is the Cake Race this Wednesday at 7pm, starting from he White Hart, Cross, Axbridge, BS26 2EE. Only 3 miles long but it does involve running up a beast of a hill. Entry is on the night, costs £7. Registration from 6:15 to 6:45pm

Congratulations.
It was the final tow path series of the year on Friday (also a club championship event) and we had some impressive results from Westbury Runners. Alex Hamblin has had some fantastic results during the series including a couple of first place wins. Once all the scores were tallied Alex was a clear winner of the series. Alex’s trophy below. 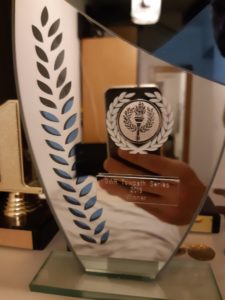 Robyn Ellis was also a winner taking home the trophy for 2nd place female, she was also second on the night. Robyn has been a regular competitor in the series, even when the weather has been atrocious.

Well done to Tom Stott who took part in the Salisbury 5-4-3-2-1 trail marathon.  This was Tom’s first marathon so congratulations for running 26 miles off-road. Tom tells me it had a nice mix of trail and road with some good steady climbs. 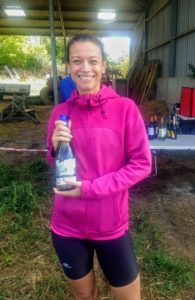 Tip of the Week, contributed by Jeni Stevenson
Invest In A Heart Rate Monitor (HRM): A HRM is basically a personal coach on your wrist . Entry level models are now as cheap as a stopwatch and even more technical models are affordable. A HRM will give you more value out of your training, ensuring that you don’t overtrain by trying to blitz every session and that you train at the right intensity for each workout.

Apologies.
A couple of apologies. Firstly to Ben, when I reported his win at the European Aquathlon. I misspelt his surname, it is of course Ben Rawlins.

Also an apology to Alison, upset when I reported the final towpath race coinciding with the end of summer. Of course summer is not over, I predict a real scorcher for the next couple of weeks!

Championship Events
Wednesday 21st August Crook Peak Cake Race. This race is held every year on the  Crook Peak Link. Entry is on the day.

Saturday 7th December. Gwent League Event: Blaise Castle, Bristol.  As a club we host this event and it’s on familiar territory, so you have no excuse for not attending.