Efforts Session. Jayne Pemble has very kindly offered to run a session at Coombe Dingle for adults and junior boys /girls as normal next Thursday (20th Dec). The plan is to have a grass based session, weather permitting.  Not entirely sure what is planned for the night although we have been promised a ‘surprise’ fun element at the very end! Possibly your last chance for some serious exercise before eating and drinking too much and watching endless Christmas telly.

Club Kit.  The Christmas elves had been working on our new club kit but after having a word with Santa they’ve all decided we’ve been far too naughty this year to have it in time for Christmas. I’m afraid to report it is now likely to be ready later in the new year, sorry for the delay.

Brailsford Christmas Lights.  We have an extra special run planned for everybody on Monday night. The usual club run routes will all be diverted to incorporate a visit to the festive Brailsford Lights (with time for a few obligatory photos) before returning to Coombe Dingle. If you’ve got a Santa outfit, elf costume or even some tinsel, bring it along as fancy dress is encouraged.

London Marathon Draw Results. And the lucky winners are……Clive Attwood, Carol Fee and Mike Hopkins (first reserve Tim Carr and second reserve Richard Hughes).  Now it’s time for getting those miles in before the big day! Also thanks to Yate for donating their place for the draw.

Dan Summers Running. In the new year Dan is organising another batch of training sessions to include night running (28 Feb) and using poles (23 Mar). For more details see www.dansummersrunning.co.uk

Ben Smith 401 Foundation Talk and Run. In 2016 Portishead man Ben Smith completed 401 marathons in 401 days, raising over £330,000 for two anti-bullying charities and changing the lives of thousands of people, including his own. On Saturday 2nd February come and hear about Ben’s inspiration story. Booking is essential, details via link.  Eventbrite Link

The Frenchay 10k is one of the countries oldest 10k events, first held back in 1980. This year it was held on 15th April and is one of the early season road events in Bristol.  The race starts and finishes on the UWE Glenside Campus so plenty of parking is available.

It has an interesting route as you take in a quick circuit of the UWE grounds before plummeting down Blackberry Hill. It then continues through Oldbury Court, through Frenchay common before returning to the UWE grounds for the finish.  It is quite easy to forget you are running through north Bristol as it’s surprising scenic, first running along the river Frome near Snuff Mills, then the open parkland of Oldbury Court Estate. On the homeward leg all the local residents provide support along Broom and Blackberry Hill.

I shall share a little advice so hopefully you don’t make the same mistake as me. From the starters gun you go careering down Blackberry Hill which is very steep, resulting in an artificially high tempo which you may decide to hold around the course. Don’t!  What goes down must go up, so save a little bit in the tank for the same hill on the return.  Gravity is not so kind on the final climb to UWE and there is nothing so depressing as having half the field of runners pass you with only a couple of kilometres to go.

Apart from he final hill this is a very enjoyable event. Well organised, with a nice friendly feel to it and with a field of approximately 700 runners there will be somebody to follow (or be overtaken by). There are no changing and shower facilities but you do have access to the UWE bar so drinks and snacks are available at the finish.  What I especially like about the event is rather than receiving a finishers medal you receive a commemorative mug.

I must make a special mention to James Harrod who took part this year. James went hurtling around the course to win 1st prize Junior in an impressive time of 37:38. I caught up with James during the prize presentation and asked him what he thought of the final climb. He just looked at me blank, I don’t think he was even aware of it!

The next event will be held on Sunday 28th April 2019, entry via the fullonsport.com site. 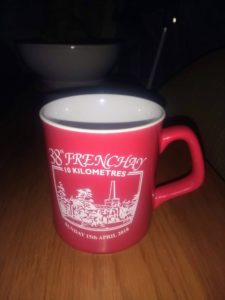