Parc Bryn Bach, at the head of the Valleys near Tredegar, is a lovely country park with a visitor centre and a beautiful lake in the middle.

But we didn’t run round that bit. The twisting race circuit was instead laid out on a bleak, wind-and-rain swept hillside, 10 minutes’ trudge from base camp. Ground that even the younger early racers described as “a bit boggy” had by lunchtime developed several well-trodden “quagmire corners”. By the time of the men’s race most of the course was like thick soup, with an extra lashing of wind and rain on top.

It was a far cry from the lush parkland of Cardiff, or the sandy trails ay Pembrey. Racing in such conditions tends to divide runners into two camps: “That was proper cross-country!” v. “What am I doing here?” But from the great numbers participating, both young and old, and the excellent results across the board, it looks like a majority of Westbury Harriers are, in horse racing terms, natural mudlarks who thrive on heavy going…

First in time, and first or thereabouts in lots of the races, the Junior Boys and Girls teams had an outstanding day.

As for the girls, over to proud team managers Jayne and Jason: 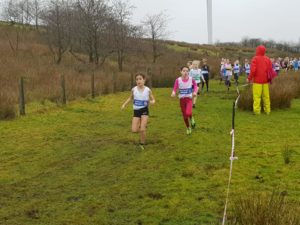 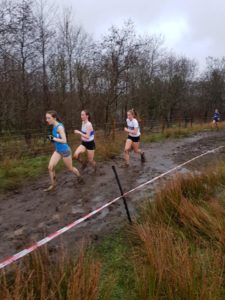 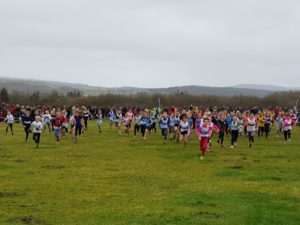 “The junior girls are really standing out in the results. We had a big turn out (28 girls) for what ended up as a very tough XC course.

So scores on the doors…

Team position 1st out of 49

Awesome. Keep it up girls – we need as many of you as possible for the last 2 events in Feb and March.”

The Boys’ teams also had an excellent day. They started in fine style, with a superb win for young Daniel Pemble in the Novice race, in a field of 103. Behind Daniel, the turnout and performances were also very impressive, with five other lads running very well to finish in the top half of the field: Edward Bourdeaux 12th, Tom Howard 15th, Henry Watson 27th, Tom Woodworth 36th, and Noah Wilson 40th. Such a fine showing brought the team up to 5th overall out of 43 teams (2nd on the day), and within touching distance of a podium place.

In the U13s, great credit is due to the only two Westbury runners, Finley White and Oliver Wilson, for battling round in such tough conditions without any other team mates in support. Let’s hope others follow their example and join them for the last two races.

By the time of the U15s, conditions were worsening and the field getting more spread out. Seamus Robinson ran another brilliant race, finishing a close 2nd behind his main Llanelli rival in the overall standings. He was ably supported by strong runs from Artie Savage-Swain (17th), Ceredig Jones (18th), and Finn Goodhew (47th), consolidating the team’s overall 2nd place position.

The front of the U17s race saw yet another exciting chapter in the ever-close Abdi Hasan/Sam Gentry rivalry, with the North Somerset athlete just prevailing this time, although Abdi retains a strong lead in the overall standings. This race saw another strong Westbury turnout and showing overall, with James Harrod 12th, Greg Hayward 19th,  Johan Hobbs 21st, Thomas Reed 31st and Josh Wood 37th. This is another team lying 2nd overall, with a strong chance of maintaining that in the final two races.

Finally, well done to the three U20 lads who comprised 30% of the field, in a race combined with the U17s: Ben Rawlins, Aidan Noble and Jack Derrick may be flyers built for running in faster conditions, but as always they gave their all and represented the club with distinction. 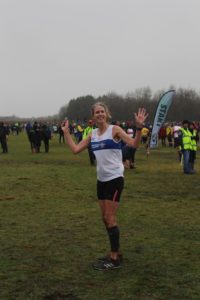 “Wow! What a day. One that won’t be forgotten in a hurry. After the balmy conditions of the first two Gwents – we were thrown in to some ‘proper’ cross country conditions. Always fun to be on a new course, especially with loads of mud, slanting rain and some windy conditions thrown in! 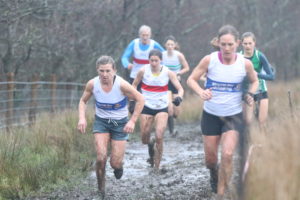 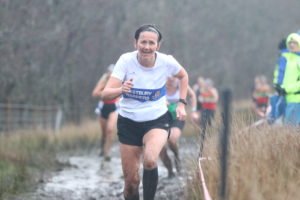 A huge thank you to all ladies for turning out and showing they are up for a challenge. Despite the conditions, we had some fantastic performances. With some commenting how much they enjoyed it!

A special mention goes to our three newbies to the Gwent – Sarah Andrews, Ellie Bourdeaux and Mel Lowe. All ran superbly. They could have chosen easier conditions to start, but at least other courses will seem easier after that! Really great to have you along ladies and I hope now you are home and warm you’ll be thinking…..yes I’m up for doing another!

Also a mention to Vicky who usually doesn’t like the mud but had a storming run today, Maria who had her best run of the season and Marilyn who seems to relish in tough conditions and breeze through, inspirational. 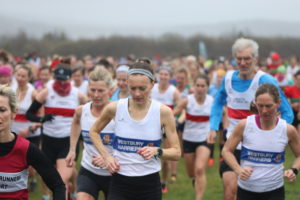 Team results: Ladies are doing really well. Thanks for all the support for our teams. A team has moved back up to 2nd overall out of approx 78 teams after some fine runs on Sunday. Our other teams sit in the reserve division – B team 3rd overall, C team 7th overall, D team 9th, E team 23rd overall – This is fantastic effort from all our teams.

So we have a break now until we face the hills at Pontypool in February. Please make sure dates are in your diary. We need us all there. If you have not been able to run yet, don’t think you are not needed. Even if you can only do one fixture it all helps. Everyone scores. Talk to the people who gave it a go for the first time, despite their reservations and the weather they all enjoyed it!”

And last but not least, the guys, who had the pleasure of starting three long circuits of the mudbath in driving wind and rain. Team manager Scott:-

“After the dry conditions at Pembrey, today’s XC was certainly a bit of a change with strong winds, rain and deep mud across most of the course. Lots of talk of ‘proper cross country’ could be heard from the locals!! Nevertheless 14 hardy senior and vet men took part and put in a very strong performance. I’ll post the team results when available but i’m hoping we will have moved a little bit up the table. We were led home by Oli Beale, and it was great to see Anthony Glover putting in a strong performance and Anthony Ballance running his first cross country in around 6 years. Plus many thanks to Neil Miller for standing around in the wind and rain to collect all the finisher tokens at the end. 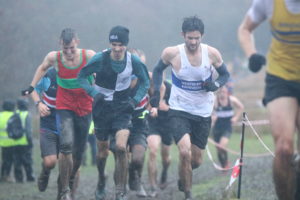 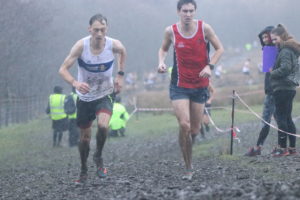 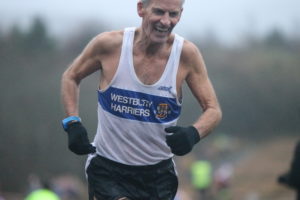 Team results: great to see the Westbury senior men’s team finishing in 6th place overall and 4th in our division (ahead of a notable local rival for the first time in a long time!!). That means that we move out of the relegation zone into 9th place. Still plenty more work to do but positive signs for the team! Some of the vet positions are looking good – 4th in V35 and 6th in V45. Next stop Pontypool in Feb!!”

So we’ve now had, in successive Gwent League rounds, green grass, seaside sand and murky mud. After a brief break for Christmas festivities and January gloom, the Pontypool Park race is on Saturday 9th February. And that means one thing. Hills. Including one very big and evil one. Start your training up Bridge Valley Road (or even the Zig Zag Path) now, and we’ll see you there. It will be good fun, really…