Gwent League Round 5 Round-Up: No Place Like Home – Westbury wind up XC season in a Blaise of Glory

The creaky clubhouse doors were prised open from their winter sleep, and a mass of volunteers got busy. Taping out the courses and picking out marshalling points. Testing the PA system for ‘our mine host’ Marvellous MC Geraint. Telling irate Welsh runners’ parents for the hundredth time that there was nowhere to park, but they could always try Lawrence Weston. It takes a lot of organisation and effort to put a Gwent League race on, and huge thanks are due to all the Westbury volunteers and League worthies who made it happen at Blaise, for the first time in over 2 years.

There was no snow this time, only a hint of possible rain which never came, and occasional warming bursts of Spring sunshine. Things were set fair for a fitting finale to the season, and with a huge home turnout in all races, and some superb individual and team efforts, Westbury Harriers did not disappoint. The course, slightly varied from the last outing in December 2016, was deceptively difficult, with just enough twists, turns and mini-climbs to test runners of all ages.

Where to start? With the girls, of course. 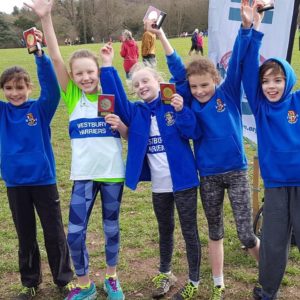 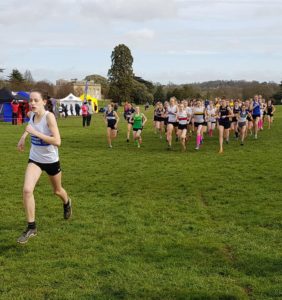 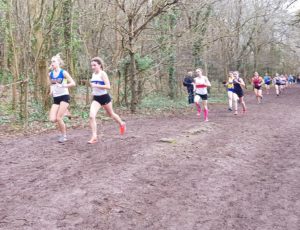 First off, the U11 Girls race produced a thrilling conclusion to the season, as Estelle Lowe held off her Swansea rival by 2 seconds to win the race, and clinch the overall individual 1st place by a single point! The even better story was that not far behind Estelle were many more team mates who all ran brilliantly, helping the girls to the team gold as well. Such is the strength in depth in the girls’ section that all of the Westbury runners finished in the top half of another large field. So very well done to Felicity Lowe (4th; and 6th overall), Erin Davis (5th), Jasmine Spear (7th), Isabelle Hugill (12th), Sophie White (31st) and Aoife Joyce (40th). Great running all season, and the future looks very bright indeed.

The U15 girls race saw Westbury girls Dalis Jones and Kate Howard clinch 1st and 2nd overall for the season, finishing 5th and 8th on the day. The team narrowly missed out on 1st place to an outstanding Cardiff Archers team, but they have run well all season and all deserve great credit, including Amelia Honor (7th on the day, 6th overall), Eva Ward (35th) and Amelia Chrisnall (36th).

The U17 girls completed a stunning season for all the girls’ teams, as Rosie Hamilton-James won her 4th U17 race out of 5 to clinch the individual title, and behind her the strong support of Lottie Livesey (7th), Rhiannon Paton (10th) and Emily Whitaker (11th) brought home another set of team gold medals. In the end, they won the team prize by nearly 100 points – not bad after starting in Cardiff with only two runners!

Proud coach Jayne said “Feeling very proud of all our Junior Girls….They have all trained so hard over the season, have ridden the tide of injuries, illness and emotions, and been rewarded for their efforts…. WELL DONE ALL. Westbury rocks!”

An equally proud Jason added that this season has been the girls’ best medal haul for 5 years in the Gwent League, and the first time since 2013-14 season that they have won team medals in all age groups, not to mention having 3 individual champions in Estelle, Dalis (her 3rd consecutive title) and Rosie.

The boys and young men had some similarly impressive runs, and an impressive turnout at this final home fixture. 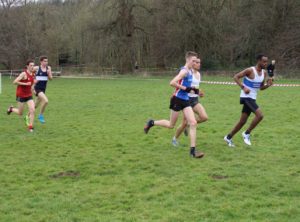 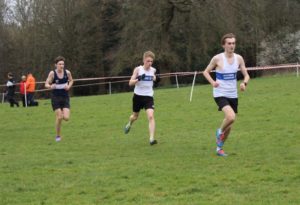 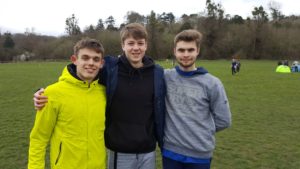 A fantastic total of 9 boys ran in the U11 race, pulling Westbury up to 2nd equal team on the day, and 4th overall for the season. If this level of turnout and enthusiasm can be continued into next season, and these boys continue to train and improve, they look set to do even better next year. For now, however, very well done to all who ran: Sebastian Snowdon (11th), Daniel Pemble (16th), Patrick Croucher (20th), Tom Woodworth (31st), Henry Watson (32nd), Edward Bourdeaux (33rd), Harry Hodgson (56th) and William Peng (83rd).

The U13s also heeded the call and turned out in numbers. Finishing 3rd placed team on the day, they demonstrated what could be achieved if they raced more often, and gained valuable experience. So very well done to Charlie Savage-Swaine (a superb 5th in his first and only race of the season!), George Peacock (13th), Akira Bees (14th, his debut too), Finley White (48th), Edmund Croucher (60th), Oliver Hodgson (69th) and Oliver Wilson (70th). See you all next season!

Seamus Robinson (U15 boys) finished the season in tremendous style to win his home race, and clinch the individual boys’ title by 27 points, having never been out of the top 3 in any of the previous four races. To cap it all, his team mates brought home yet another Westbury team overall gold, top scoring team on the day and champions by 47 points. Well done for this day, and the whole season, to Ceredig Jones (19th), Alexander Wilson (24th), Artie Savage-Swaine (31st), Finn Goodhew (35th) and Christopher Page (42nd).

And there’s more. In the U17s, Abdi Hasan eased to victory over his nearest Cardiff rival, securing another individual overall title. With such strength in depth, Westbury might have won the team prize in any other season, but still managed a creditable 2nd overall behind an outstanding Cardiff team. There has been very good running all season by James Harrod (6th on the day, and 6th overall), Greg Hayward (7th), Josh Morland (21st), Thomas Reed (33rd) and Oliver Shrewsbury (35th).

Finally, let’s hope that our current U20 lads can turn out for the Senior Men pretty soon. A strong turnout and showing on this last day of the season saw them ‘top score’ on the day and win the overall team gold for the season. There were overall individual medals for Ben Rawlins (2nd overall; 3rd on the day) and Aidan Noble (3rd overall; 4th on the day), and good runs also from Hugh Tarren, Jack Derrick and Freddie Livesey (9th, 10th and 11th).

Our very own (and the Gwent League’s) Neil Miller summed up the scale of Westbury junior participation and success, by collating all the run data and concluding:

“It’s been a fantastic club performance, with 79 youngsters participating in one or more events, five individual champions, four team champions, lots and lots of other medallists, and, most importantly of all, plenty of smiling faces!”

How could the Men and Women follow all that junior success? Actually pretty well, in terms of turnout, and there will also be a good few medals and Gwent League porcelain plates to be handed out at the prizegiving in April… 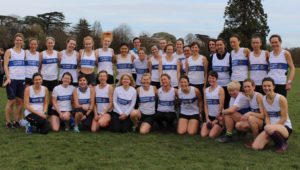 “What a finale for our ladies team in the Gwent League at Blaise. Before the race we were on track to have 40 ladies run, that target will have to wait until next season. We still had an impressive 34 compete. Blaise is a deceivingly difficult course but everyone gave it their all.

Special mentions go to the Gwent newbies – Michelle, Catherine, Isabelle, Liz, Caroline and Stephanie. Hope you enjoyed your first Gwent and will be back for more. A welcome to Emma (Taylor) who had a fantastic debut in the senior event. A welcome back to Elinor and Mel: as Parc Bryn Bach didn’t put you off, you are now in for the long haul! Alison and Abi who had one of their best runs this season. Phoebe who ran despite being in wisdom tooth pain, Marilyn who managed to fall over twice but was still smiling at the end, and Jeni who is always there despite saying she is not overly keen on XC!

Also a well done to those who have managed to complete all 5 fixtures – Katie, Robyn, Vicky, Jayne, Tamsin, Jeni, Maria, Abi, Shirley, Eithne and Nicola. 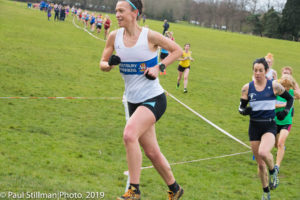 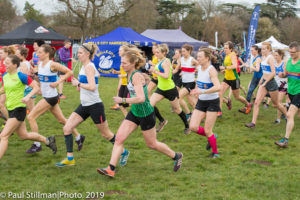 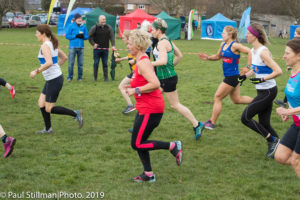 Overall this is one of our best seasons in recent years. We had 49 ladies take part this season (last year we had 34). With such a consistent turnout at all fixtures it has meant we have finished with impressive results. So thank you to everyone who’s taken part, whether in one race or all five – you have all helped out. Most of all, we have had lots of fun along the way, people have got to know one another better and we have had a great team atmosphere.

In the divisions A team 2nd in the first division. All the other teams sit in the reserve division where we finished an impressive B team 2nd, C team 4th, D team 6th, E team 10th, F team 16th and E team 24th out of 29 teams.

Just brilliant! Look forward to doing it all again from October 2019!”

We can add to Tamsin’s team summary details of some outstanding individual performances, at Blaise and throughout the season.

Top Westbury woman over the season was Katie Hughes, who ran consistently well throughout the season in all conditions to finish an incredible 6th overall (out of 618 who competed) and 2nd VF35, just 5 points behind the winner. It was no surprise that the VF35 and VF45 teams did so well, with four more Westbury women in the VF35 top 10 (Robyn Ellis 4th, Vicky Tester 6th, Jayne Pemble 8th and Tamsin Chick 9th). There was similar strength in depth in the VF45 standings, with Jayne 4th, Maria Hobbs 10th and Jeni Stevenson 11th. Finally, two of our British Masters golden girls, Shirley Hume and Marilyn Palmer, cruised to 1st and 2nd in the VF65s. Let’s all wish Pat a speedy recovery so she can rejoin them next season. 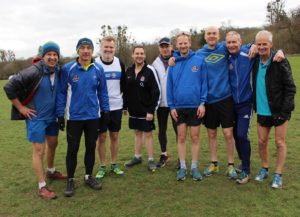 “Well done to all the senior / vet men for running at Blaise on Saturday. We had 19 runners which was our highest attendance of the season. We were led home by Oli Beale in an impressive 16th place for his strongest run since the Tri-counties. Special mentions for first timers at XC Ian Gawinowski, Kevin Easby (after having his arm twisted by Mike!!), Alastair Blackwood, Kevin Rawlins and Iain Large – hope to see you all back for the first race next season!! 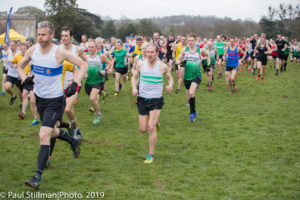 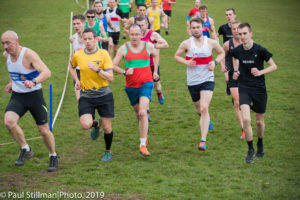 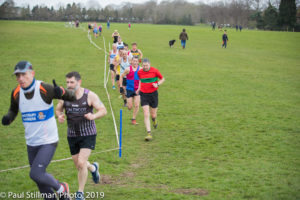 Overall team result for season: 8th – keeping our place in Division 1. After a slow start we picked up throughout the season to keep clear of relegation. Let’s try and start next season a bit stronger, with more runners at all levels to get us off to a good start.

Individual results for season: The V45 team were out in force this season with Rich, Ewan and Matt running all 5 races. An even battle throughout with Rich finishing the season with some great performances.

So another Gwent League and cross-country season comes to an end. If you didn’t try it this year, why not have a go when it starts all over again in October? Even if you consider yourself a speedy road thoroughbred rather than a mud and grass steeplechaser, it’s always a fun day out, and is scientifically proven to improve your core strength and endurance for other running challenges. Westbury Harriers are an integral part of what is a very high level, mostly Welsh and tremendously friendly league. Next year we promise added cakes and camaraderie in the tent, and maybe even some loud 80s pop music at the Blaise fixture. See you there!

Thanks to Jason, Mike and Paul Stillman Photography/’Les Stills’ for photographs, gratefully used.