As the long hot summer continued into August, surely it was time even for the keenest Westbury Harriers to put their feet up, air their running shoes in the garden and have a relaxing holiday in cooler climes? Maybe for some, but many runners (not just Ian G) kept racing through the month. Others may have taken their running shoes on holiday and attempted the odd ‘gentle’ run in the ‘cool of the morning’ on sun-baked Mediterranean shores, only to expire in a sweating mess 20 minutes later…

For those on the home front, there were plenty of racing opportunities, category prizes, and even Club Championship points available in the region. 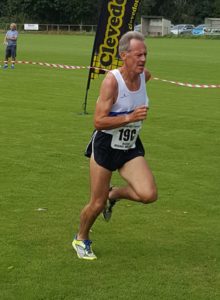 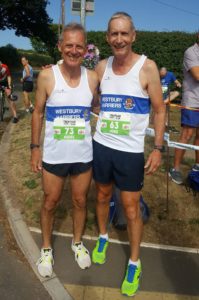 Many congratulations to the remarkable Nigel Gates (pictured above, en route) and thanks to Mike Mewse for his report and photos:

“A tough course with 140 metres of climb and high temperatures for the BMAF 10K Championships, held in conjunction with the Trentham 10K. A high standard race for vet runners with British, European and World record holders lining up. Nigel Gates was in good form and took the BMAF V65 title with a great run (40.11) ahead of Ian Kiching of South London Harriers and Stanley Owen of Salford Harriers, Nigel also picked up the V65 trophy (and prize money !) for the Trentham 10K . Mike Mewse V60 was more than happy to finish 16th MV60 and get …. a Finishers medal !”

According to hosts Stroud AC, this is “a multi-terrain race over a course of almost ten miles following parts of the famous Cotswold Way”

This was a Club Championship event, but situated as it was i) 28 miles away and ii) in the middle of the peak holiday season, the Westbury contingent was confined to Ian Gawinowski (17th 1:09:48) and Sophie Voller (23rd, 1:12:50) in a field of 102. Credit to them for flying the Westbury flag, and harvesting maximum Championship points.

In the words of top Westbury finisher Ian G:

“There was a brutal hill at the start but once this was out of the way it was a pleasant circuit. Two laps through woodlands on forest tracks (not too technical) with plenty of water stops and helpful marshals along the route. Also some good descents to put Dan [Summers]’s fell running techniques into practice!”

Well done to all Harriers who took part in this and other races in the series this summer.

Well done also to Sandra Williams, who didn’t make this race but still won the series prize for FV40, kindly collected for her by Trevor.

This was a short-ish fell race (with cakes) over a big hill in the Mendips, with more Club Champs points available, at least for the four Westbury men who attended. Well done to Ken Ham for finishing 1st VM50 in yet another race. Full results: 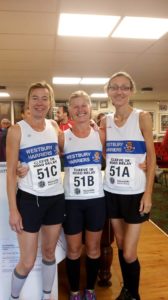 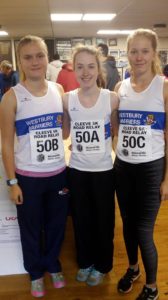 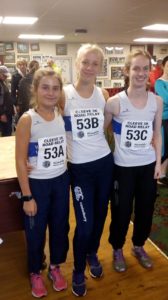 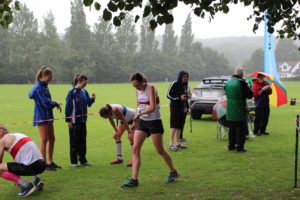 For those who missed the extensive reports and photos of this on Facebook, the Harriers teams who took part in this did the club proud, especially our super women.

In complete contrast to last year’s sweltering Bank Holiday Sunday, this event unfolded under leaden skies and in driving wind and rain, giving it a distinctly Autumnal feel. Westbury had a total of nine teams out (five men’s, four women’s), who together with Bristol & West pretty much dominated the day, in numbers and prizes.

On the female side, two of the teams comprised young runners competing as Senior Women, in some cases for the first time. Unfazed by this, they finished second and third overall, a hugely impressive achievement. The silver medallists were Hannah Hobbs, Steph Cummins and Ellie Hobbs (all 18 or under), with Hannah running the fastest female individual leg of the day (17:38). The bronze team were Rosie Hamilton-James, Kate Howard and Rhiannon Paton (all 15 or under!), clinching 3rd by just 10 seconds on the last leg.

Congratulations to the also youthful and speedy VW45+ A team, who scooped the category gold medal with fantastic runs from Maria Eriksson-Hobbs, Jayne Pemble and Jeni Stevenson. Maria maintained the Hobbs ascendancy by running the fastest VW45 leg of the day (22:28), just 1 second faster than Jeni, with Jayne only 6 further seconds behind in 22:35. Well run also to the “B”s, Nicola Derrick, Caroline Scapens and Sarah Tucker for braving such tough conditions. 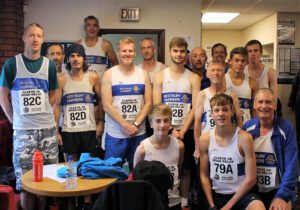 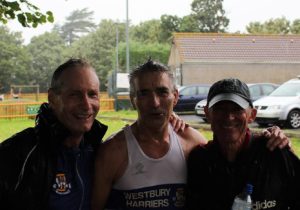 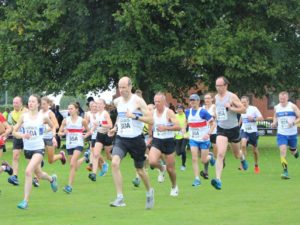 As for the men, in the words of team manager, photographer, competitor and chocolatier Mike Mewse:

“Well done to the five men’s teams from Westbury who braved the (very) wet and windy conditions at the Avon Athletic Association 5K Road Relay Championships. There was a great team spirit with some fine running in all the age groups. Proud to see our “Young Lions” A Team – Johan, Greg, Aidan and Ben emerging from the junior ranks to become Senior Men – great potential there. At the other end of the age groups, Nigel Gates ran a stunning first leg to set up Mike Mewse and David George for a team win in the V60 category. Nigel also picked up the top V60 individual prize.

Good to see debutants Mark Andrews and Matt Swaine turning in classy performances for the V50s and V40s respectively. Robin Phillips (V40) was, as always, in excellent form with a fast first leg for the V40s.

Team Manager’s “Run of the Day Award” : Nick Smart – for a really good run in the very worst weather conditions.”

The fastest Westbury men’s leg of the day was run by GB aquathlete Ben Rawlins (17:26), anchoring the “Young Lions” to a very impressive County 4th overall.

At the same time as the Relays, over the bridge in Wales, then England, then Wales again, some intrepid Harriers braved the wind and rain, and the risk of being blown into the river, to run 13 miles instead of 5K. In the words of serial racer Ian G again:

“It was also a wet and miserable day for the runners taking part in the Severn Bridge Half Marathon… Last year it was too hot, this year too wet, you just can’t win!

Well done all, some fantastic running in atrocious conditions.” 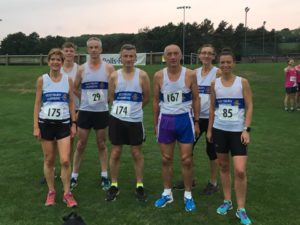 With the weather now cooled to nice Autumn racing conditions, and yet more Club Champs points up for grabs, seven Harriers took part in this long established (41 years) local road race, starting and finishing at the Cribbs FC (formerly AXA/Sun Life) ground near Cribbs Causeway. The route took in the speedy descent of Hollywood Lane, then the open country stretch along Berwick Lane, before re-ascending up the familiar (to Harriers who run around Blaise) gruelling climb up Hallen Road towards the finish.

All of the Westbury athletes who ran could be very satisfied with their times and performances. Pride of place, and a superb 3rd place overall, went to young Aidan Noble, showing some of his best form of the year in 33:01, just 2 seconds ahead of 4th. There was yet another excellent run from Sophie Voller (36:06), who was the first female home by nearly a minute from her nearest rival.

Well done to all who have raced this month, and good luck to all those doing the Bristol Half Marathon on 23rd September. After that, we’re pretty much into the cross-country season. The club expects a big Westbury Harriers turnout from all ages in the first Gwent League round in Cardiff on 13th October – see you there.

Thanks to all for regular Facebook reports and photos, some gratefully incorporated here.