Richard Bloss Personality of the Year Award. The voting box, hand crafted by Lizzie, along with voting slips is in the foyer of the Sports Pavilion on Monday and Thursday nights. So don’t forget to cast your vote.

Membership. Membership renewals are now overdue, especially important to note as the current system will close at the end of the month. I’ve provided a link to the How to Join section of the Westbury website. How to Join

Awards Night. More spectacular than an olympic opening ceremony, more glamour than the Oscars and better organised than a NASA mission to Mars. Yes, it’s the annual Westbury Harriers Awards Night. Awards will presented to recognise the marvellous achievements over the last year of club members for athletic ability, effort, determination, volunteering and inspiration.

Catering will be provided and there will be a pay as you go bar. Unlike last year there will be a few breaks between presentations to give people the opportunity to have a leg stretch, grab food and drinks. Awards will then be followed by a disco to dance the night away.

It will be held at the Westbury Village Hall, Eastfield Road BS9 4AG. Doors open at 6:30pm with awards being presented at 7pm. Tickets, £5 each, Family of three £12, Family of four or more £15 and children under 7 are free and can be purchased using Paypal (or on the door). Please follow the link for details and payment. Awards Night

Vacant Posts. The AGM is only a few weeks away so do please consider taking on one of our vacant positions.  They Press Officer, Club Development Officer, Volunteer Coordinator, Assistant Boys Manager and an Assistant Reception Group Coordinator. We need people to become involved in subcommittees for specific events. If interested please let the club secretary know (secretary@westburyharriers.co.uk).

Awards Night Trophies. Do you have an award that requires to be returned for the next recipient? If so, please bring it along to the next training night so it can be engraved in time for Awards Night.

Congratulations. Well done to to everybody who run the Bath Half Marathon yesterday, I hope you all enjoyed it. There were some fantastic results including a number of PB’s. Katie Hughes was just flying along, coming across the finish line in 1:22:34.  But Katie was not alone as both Alex Hamblin and Ewan Paton also took home some PB’s. Ewan coming home in 1:23:05 (235th) and Alex in an amazing 84th place 1:16:38

It was also the Gloucester 20 (the last club championship even of the year) and again some impressive results by Westbury runners. Look out for the next results roundup for a full briefing.

Photo below: Alex powers through the streets of Bath for a half marathon PB. 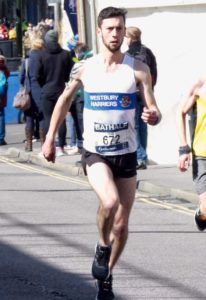 Saturday 30th to Sunday 31st March. Colin’s Welsh Coast Path. Har-lick (Harlech) to Have-a-sock (Abersoch). The next leg takes us along stunning beaches and past numerous castles. We plan to start at Harlech Castle running along to Criccieth on the Saturday. Then onto Abersoch on the Sunday. Very few hills and approx 18 miles each day. You don’t have to run it all and nobody gets left behind. Accommodation could be at Abersoch on the Friday and Saturday nights.

That’s all for this year folks! Many thanks to the Championship Committee for selecting the events and keeping a tally of the scores. Results for this years winners will be announced as the Awards Night.

Once I know the events for this coming year I’ll let you know. Just watch this space!