Colin Johnson ran the 2016 Budapest Marathon. Nothing too out of the ordinary there, Colin’s done a few marathons, but this time there was a little twist to it, he was acting as a guide for a blind runner. Colin tells us his story.

Why did you decide to be a guide runner? What was your inspiration?

I personally find running provides me with so much more than just being fit, by improving your whole mental outlook on life in general.  It was the idea of being able to help someone else achieve both their personal goals and help them to also improve on their well-being seemed like a great idea.  It was a post on Facebook by fellow club member Tim Carr asking if anyone wanted to try guiding a blind person around the Budapest marathon that I though why not.  So I followed up and arranged to meet with Chris (Blind runner) for our first training session together.

Was there any particular training you had to do to prepare for the race? or can anybody do it?

I did a bit of research and discovered that UKA provides a 2 hour guide training course which I signed up to do.  There is nothing particularly sophisticated to learn and the most valuable part of the course for me was taking it in turns to wear a blindfold and be guided as well as being the guide.  You very quickly realize the high level of trust place in your guide as well as the correct use of language to describe the approaching hazard and timing to react. I then did a number of training runs with Chris which is very much about getting to know each other and what best suits him when running.  Each visually impaired (VI) runner can be very different depending of their level of sight and how they came to have their VI (From birth, degenerative etc.)

How many times prior to the race did you train with your partner?

We actually only trained together 5 times before we did the marathon, the challenge with us training together is the fact that Chris lives in Hereford, so I either traveled to Hereford or we met somewhere in between and on one occasion Chris came to Bristol.

The race – how did it differ compared to running on your own? what challenges did it present you and your runner with?

It’s important that your VI runners target time is well inside your comfort zone because as a guide you have a lot more to think about than just running. You need to be looking for all potential tripping hazards, uneven road surfaces, curbs as well as avoiding other runners and providing a commentary so they can react in time to a hazard.  Budapest is a pretty flat course up and down the river on mostly roads which is ideal for guiding. The main challenges were a few cobbled streets which are very uneven and would be a challenge for a sighted marathon runner, this caused our pace to slow right down at these locations.  The other unexpected issue for Chris was with very load cheering of crowds and bands.  For you and I this often provides great support and motivation, but for a blind person your hearing is one of your only remaining senses and having an overwhelming noise can be very unnerving.

What was the most difficult part of the race?

As it was a big race with many thousands of other runners, the organizers had us in crowded pens at the start of the race, and this was quite a challenge being squashed in. Ideally it would have been better to have us near the front of the race start.

When you crossed the finish line what were your emotions like?

As it was Chris’s first marathon that last couple of miles were pretty emotional, from about mile 23 Chris knew that he was going to complete his first marathon and had tears streaming down his face in joy. It felt very special to be able to share in this with him and to have helped in a small way to help him realize a dream.  Very humbling and inspiring for me in so much that in spite of his lack of sight he manages to get out of his front door and train when many times it is all too easy to find an excuse not to run.  He also skis both downhill and cross country as well as climbs, and is a triathlete so is an inspiration in his own right.

Would you do it again? and what would you say to anybody else who was thinking of becoming a guide runner?

Yes we have already ran another half marathon together and are planning running some other half’s Great Nort Run, as well as the Edinburgh marathon.  If anyone is thinking of becoming a guide I would say give it a go and you will find it to be one of the most rewarding things you may ever do.  I am looking to try and organize a guide runners course in late January 2017 along with UKA.  Having talked about blind people with Chris he has explained that many blind (VI) people can become very isolated and withdrawn from society and I have this idea to try and organize a running course/group for blind people with the help of other guides in Bristol. (couch to 5K) With the objective to try and help blind people discover how much running can change your life for the better.  So if anyone is interested in helping and becoming a guide please let me know. 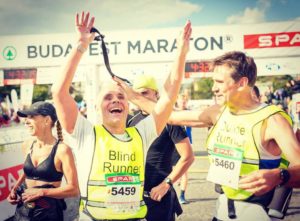