For most of us, it’s the longest trip of the cross-country season, but the sea air and firm sandy turf of Pembrey Country Park in Carmarthenshire make it the favourite of many. Once you actually get there.

Responding to the call for good numbers, many Westbury Harriers young and old made the 2 hour-plus journey, virtually the full length of the M4 then left at Llanelli. They would encounter wildly varying conditions. Some juniors ran early on in gales and driving rain, but the men finished off the day’s proceedings in positively balmy sunshine. All ran well and represented the club with distinction, maintaining and improving league positions across several categories. And there were many more “top 10%” T-shirts too. 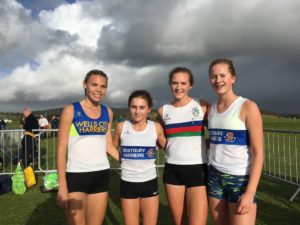 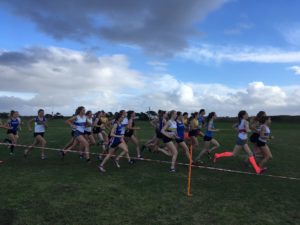 The Novice Girls continued their impressive form after their outstanding start at Cardiff, and strengthened their grip on 1st place in the team competition. Estelle Lowe ran superbly and was narrowly pipped into 2nd place, but had an equally impressive team not far behind her – Felicity Lowe (8th), Jasmine Spear (11th), Isabelle Hugill (13th) and Sophie White (28th) in a massive field of 124.

The U13s also got a full team out, and look to have stayed in 4th place overall, with good runs from Elen Ruck 7th, Hannah Jones 17th, Abbie Woodworth (or “Woolworth” as the League officials curiously call her, perhaps showing their age..) 19th and Maeve Robinson 52nd, in another large and strong field. They look well placed to pick up medals this year if they keep improving.

Hmm, who might have won the U15 girls race, again? Yes, Dalis Jones continued her extraordinary Gwent League sequence (win number 11!), but this one was extremely close, with Dalis just 1 second ahead of her Wells challenger. Once again, the team was strong and ran well throughout, with Kate Howard and Amelia Honor in 10th and 11th (also separated by 1 second), and a welcome return to a Westbury vest for Tilly Spinney, running strongly to finish 18th. Barring injuries and no-shows, this looks like another good prospect for a team victory if this form and turnout can be maintained. Unofficial counting suggests that with these performances they have edged ahead of the two Cardiff teams into 1st place.

After the disappointment of not having a full team at Cardiff, and despite an injury to Rhiannon Paton, the U17 girls were able to field four strong runners in their later race, which was combined with that of the U20s women. While it was difficult at times to tell who was in which category, when the long race was done there was great cause for celebration. It was a Westbury one-two: Rosie Hamilton-James was the 1st U17, having kept pace most of the way with the U20 winner; while Ellie Hobbs was not far behind in 2nd. In another welcome return to Gwent racing, Lottie Livesey ran superbly to finish 8th, and with Emily Whitaker close behind in 14th, these results restored the U17 team to a healthy league position. Again, unofficial arithmetic suggests that they were top scorers on the day by a whopping 31 points, moving them up to 3rd, just 5 behind Swansea in 2nd and 15 behind Cardiff AAC in 1st. At this rate they may well overhaul their rivals after the next round. 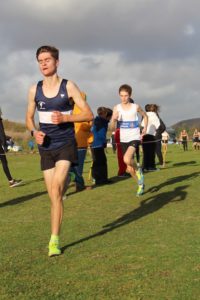 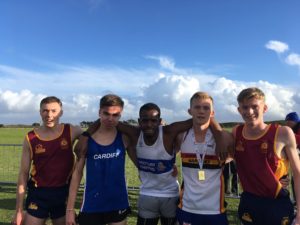 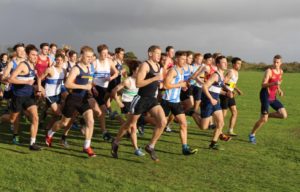 [pictured: James, winner Abdi, Aidan and Ben at the start]

In the Novices race, it was a ‘tale of two Toms’, with Tom Howard and Tom Woodworth only separated by one second in 29th and 31st out of 98 runners. They had no other team mates, but very well done to them for travelling so far and running so well.

With no U13s making the trip, it was over to the U15 boys to provide Westbury’s first full boys’ team of the day. All five lads ran well, and a rough abacus count suggests that the team were the day’s top scorers and rose to 3rd in the standings. Seamus Robinson led them home, and was just pipped into 3rd in the final straight. Artie Savage-Swain and Adam Shrewsbury (14th and 15th) were another pair of Westbury runners who packed well and were separated by one second, while behind them there were solid runs from Ceredig Jones (22nd) and Christopher Page (55th).

The biggest boys’ turnout was in the U17s, where Abdi Hasan used his track speed to great effect on the fast course, romping home to win by over 30s. Behind Abdi, the other Harriers improved the team’s overall position to 2nd, with James Harrod (13th) next in, followed by Greg Hayward, Johan Hobbs and Josh Morland (19th, 21st, 22nd). Well run also to Thomas Reed (38th) and Oliver Shrewsbury (44th).

To complete the picture for the young men, Westbury was also able to field three runners in a very strong U20s field, with Ben Rawlins in 13th (warming up for his Sodbury Slog victory the next day) followed by Aidan Noble (16th) and Jack Derrick (18th). 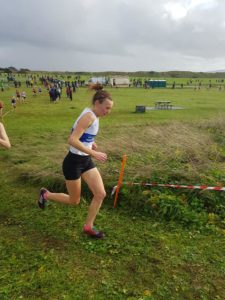 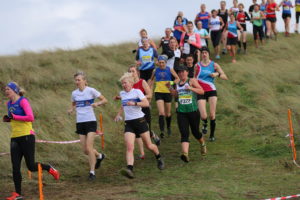 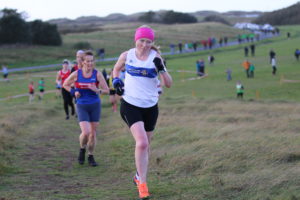 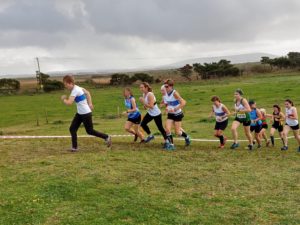 There was another impressive showing from the Westbury women.

“With heavy rain on the journey over the weather brightened up for the race. Pembrey is a scenic, interesting and enjoyable course and suits those who are not fans of mud as it’s very light underfoot. The ladies squad again was out in numbers and big thanks to you all for turning out. Also thanks to Marilyn Palmer for stepping in for me. I was glad to just make it in time!

Hannah Hobbs led the ladies home in a fantastic third place. Katie Hughes and Kirstie Hamilton-James continued their strong form of late in 16th and 25th. Robyn Esther Ellis, arriving from Edinburgh just in time to jump out of the car and get to the start line, had a solid run in 34th. Vicky Waters put in a fine performance to complete the first team in 46th.

Well done all – great packing and some really strong runs. This really helped our team results as you can see below.

Our teams are doing really well – but need you all and others as we are being closely chased in many age groups. U23s are currently 4th overall, senior ladies have slipped back to 3rd overall. In the reserve division we are doing fantastically with our B team 2nd, C team 4th, D team 9th and E team 19th. That is the highest our C team has ever been. V35’s A team are 1st but only by a few points. V35 B team 3rd and V35 C team 9th. V45’s are having their best season in years. With the V45 team A team currently 2nd, V. 45 B team 7th and V45 C team 19th. V55’s are 3rd and V65s are unstoppable in 1st and heavily supporting the V55 team.

Next fixture is Sunday 2nd December ladies race is 12.58pm (precisely!!) Please start letting me know if you can run…” 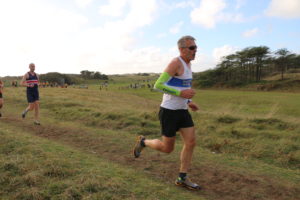 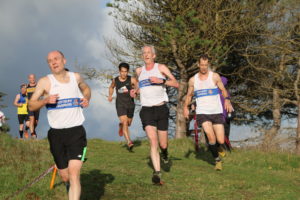 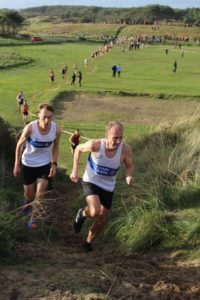 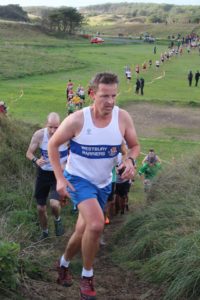 Heeding the call for increased numbers, Westbury men lift-shared, flew and in one case hot-footed it from a wedding reception (well done Tim!) to provide a team of 14. Still room for plenty more at the next race, though…

“Despite being a bit further away and with weather warnings being issued it was great to see numbers up at Pembrey for the second XC of the season. On a fast scenic course, we were lucky enough to have a dry weather window for our race and there were some strong performances across the team.

Led home strongly by Oli Beale in 16th place and with Matt Ellis flying over from France for the race (no excuses from others saying it’s too far away…..!) and Alex Hamblin close behind we made up a few points on some rivals. We are still in the relegation zone though in division 1, so let’s keep up the strong performances to move us up the table.

I enjoyed being back racing again and it was good to see David Hobbs and David George making rare appearances on the XC.

The next fixture is at Parc Bryn Bach, near Tredegar – a mere 53 miles away – on Sunday 2nd December. That’s Welsh for “Small Hill Park”, so it shouldn’t be too hard. As the above standings suggest, it really is important to get as big a turnout as possible in every category, young and old. The last scorer in a team is often the vital one. So no excuses and no Christmas shopping – see you in the Valleys!