It’s the one we’d all been dreading eagerly anticipating, putting in extra hill training sessions on Mondays and Thursdays. Because a few swift climbs of the mean streets of Coombe Dingle would be ideal preparation for the assault on muddy Mount Ponty. Well, almost….

With the snow gone almost as quickly as it fell, but intermittent bursts of torrential rain before and during the earlier races, conditions underfoot on the slopes of Pontypool Park were muddy in places, if nowhere near the comic levels of Parc Bryn Bach in December. Most of the rain just ran down the big hill. But it didn’t have to run up it as well, unlike the hardy souls, young and old, who crossed the bridge (toll free!) for round 4 of this season’s Gwent League.

Everyone had to tackle the 600m, average 10% (at some points nearer 14%) gradient monster up to the top of the park at some point. The lucky old senior men got to go up it three times. Many racers also found themselves bogged down in the nasty little woodland section, reminiscent of the steepest Blaise trails. For many, however, the biggest challenge came when tumbling, ‘windmilling’, or just straining back nervously on their heels on the way down again, over mud, ruts and molehills. Cross-country reaches parts and muscles which other racing doesn’t. With quads already aching from the ‘up and down’, the tight muddy corners and awkward sidehill sections then put great strain on stomachs and cores.

But needless to say, Westbury’s finest could handle it, and did so with aplomb. There were yet more fantastic runs in all races, some impressive debuts, and several hands placed more firmly on individual and team Gwent League trophies.

Juniors first: there was another impressive turnout and performance by all of our boys and girls.

As for the girls, coaches Jason and Jayne:

Novices – “With 3 girls in the top 5, Westbury are as good as champions. Estelle Lowe with a fantastic victory is now joint leader. Well done to Estelle, and to Erin Davis 3rd, Felicity Lowe 5th, Sophie White & Amberley Ramm (debut) both in the 30s.”

After 4 rounds, Estelle is tied 1st in the overall standings with her Swansea rival – should be an exciting final race at Blaise! As Jason said, the team are a cool 141 points ahead of Swansea, so with another full turnout at Blaise, the team trophy is surely theirs.

U13s – “The girls did themselves proud and kept in contention for that 3rd team place. Clemmie Lee in 2nd place led the team home, backed up by a strong run from Hannah Jones 15th, a hard fought 24th place from Abi Woodworth and the ever improving Corinne Jones in 26th. Sophia Bailey ran well in 38th.

Want to say a big thanks to Julian Emery of North Somerset who helped Abi when she fell over going down hill, and encouraged her to keep going! We need all our 13s out at Blaise, as the team event will go right down to the final runners home. ”

U15s – “Well done to Dalis Jones 4th, Kate Howard 8th, Amelia Honor 10th & Eva Ward 30th. The girls ran so well and battled really hard even when it very tough for some of them.”

Dalis remains overall individual leader and looks certain to bag another title. Behind her it is desperately close, with Kate tied 3rd only 3 points behind 2nd, and Amelia just 12 points further back in 7th.

“The team have slipped to 2nd place, as Cardiff Archers had a blinder, but our girls couldn’t have done anymore, and I’m very proud of them all.”

The team are only 10 points behind the Archers, so a strong showing on our home turf could see Westbury catch them for the trophy.

U17s – “The girls ran great once again, to strengthen their grip on the title. Rosie finished 2nd in the combined u17s/u20s race but won the u17s race. She is also overall leader.”

It was in fact a Westbury 1-2 in the U17s classification, with Ellie Hobbs 2nd. Behind her there were excellent runs from Lottie Livesey in 5th and Emily Whitaker 14th. With a 49 point ‘swing’ from those performances, the team trophy is almost (but not quite) in the bag.

As for the boys, very well done to Novices Daniel Pemble (5th), Tom Woodworth (19th) and Edward Bourdeaux (38th) who all ran well in a huge field of 113 starters. The lack of a full team set them back a little in the team standings, but they still have an outside chance of a medal with a strong showing at Blaise, after an excellent season for all runners.

We need more U13 boys! But well done to solo racer Finley White who represented the club with a strong run in 51st.

In the U15s, a very strong team performance contributed to a potentially trophy clinching lead over their rivals from the two Cardiff clubs. Seamus Robinson was just pipped into 2nd  by his Cardiff rival, but Seamus leads him by 4 points in the overall standings, so a top 4 finish at Blaise will be enough. Behind Seamus there was great running by others, with Ceredig Jones 13th, Alexander Wilson 18th, Finn Goodhew 24th , and Christopher Page 42nd. 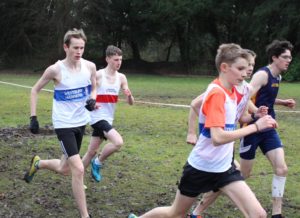 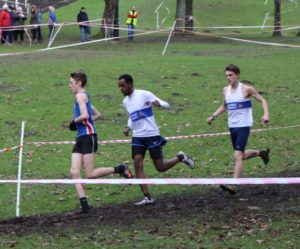 The U17s race saw Abdi Hasan, like Seamus, finish 2nd behind a Cardiff rival but strengthen his grip on the individual overall title, in which he now leads by 13. Again, there was great Westbury strength in depth in this race, with James Harrod having another excellent finish in 7th, and not far behind him Greg Hayward (11th ) , Josh Morland (13th ) Oliver Shrewsbury (21st) and Thomas Reed (27th ). The team won this round, and consolidated their 2nd place in the overall standings.

Super running also from our (not so) young lads in the U20s, with Ben Rawlins gaining his first ever Gwent League 1st place, Aidan Noble 4th and Jack Derrick 7th. That strong and top-scoring team performance puts them in 2nd overall, with a real chance of catching Cardiff in the final race. 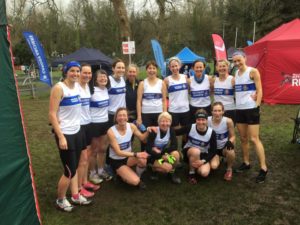 “Our amazing ladies team! Thank-you for always turning out and taking on the challenge and still all be smiling at the end. Well done all, that was tough. I have to say it felt fairly brutal up those hills. Pontypool weather is always interesting, a bit of wind and rain to make those hills a bit harder. 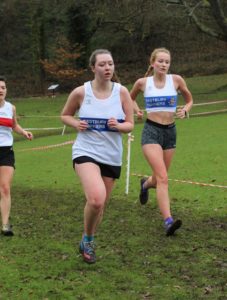 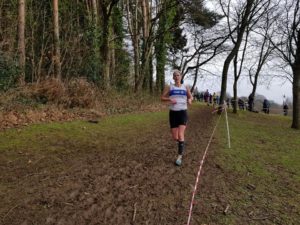 Katie was not looking forward to this course but after her second best position of the season and leading the ladies home in style she may look at this course more favourably. Vicky continued her impressive form of late and Maria had a storming run to finish inside the top 60. It was wonderful to welcome some new younger members to their first Gwent (nothing ever wrong with a team of vets though!) Erin, Hannah (having recently had a baby) and Ellen – well done all, hope you enjoyed it and join us again. Also lovely to see Lucy and Lindsay back in the team. Sarah is trying to win the crown of who can fall over the most amount of times in a Gwent league! Hope you are OK Sarah and stay on your feet at Blaise! Still managed to run fantastically. Stand out comment of the day, by Scott Campbell ‘looking strong’ as we tried to drag ourselves up the hill for a second time into the wind & rain. Very encouraging and supportive if a little bit of a lie!”

“I’ve never done this course before..I wonder why. No only joking, it was tough & the last 200 metres was the hardest bit, when Tamsin told me to keep my head up & pick up the girl in front who was half my age. So I did what I was told & seriously thought I was going to be sick! Thanks, Tamsin”

The senior women’s team consolidated their 2nd place overall, behind Bristol & West (who were led home by race winner and GBR athlete Charlotte Taylor-Green), but as Tamsin said, there very many great runs across the categories from new and returning runners, and Westbury are dominating the so-called “vets” teams (35 and over). The women’s V35 team top scored again, and look to have an unassailable lead in the overall standings, with the V45s in a strong 2nd. In the individual standings, Katie Hughes lies in a very close 2nd in the V35s, just 4 points behind her Swansea rival. Shirley Hume, 1st V65 once again, looks to have the overall title under control, and is even 2nd in the V55s for good measure!

As for the men – once again (with the exception of young Alex) all ‘vets’ and nearly all over 40, which was great to see, but we need more senior (i.e younger!) chaps to race too! Team manager Scott, who led the team bravely until unfortunately pulling out injured:-

“Well done to the senior men’s team at a classic cross country course at Pontypool – full of hills and mud, although the weather was unusually kind for our race. The team was led home strongly by Alex Hamblin who worked well with Oli throughout. Also congratulations to Richard Noble who had a really strong run to finish well inside the top 100.

Despite the slightly low turnout, the senior men’s team finished a pretty decent 10th on the day, probably doing enough to preserve their Division 1 status (currently lying 8th). The V35 and V45 teams both lie in a solid 4th behind the exceptionally strong Les Croupiers and Mickey Morris vets, probably a little too far back for a medal, but well run all season. A particular well done to Rich Noble, whose excellent run bagged him his first “top 10% T-shirt” of the season!

So, then – the last round is at our very own Blaise Castle on 2nd March, barring another ‘Beast from the East’ snow flurry, flood or hurricane. Unless you’re volunteering all day, what’s your excuse for not running? We aim to host a fine final League event as usual (although we can’t do anything about the parking..) and it would be great to see as many blue-and-white vests as possible in all age categories, showing just what a friendly, thriving and successful club we are. As described above, there are a good few team medals up for grabs, and every runner scores for at least one team. And you already know the course very well. So see you there!

Thanks as always to Neil, Jayne, Jason and all athletes, parents and families who turned out on a long but enjoyable day.

(and thanks to Jason, Mike and Robin for photos, reproduced with thanks. But no-one took any photos of the men, suffering on the way round. On second thoughts, probably for the best…)