I’ve had this week off but I’m afraid it’s not been very exciting as I’ve spent most of my holiday decorating, cleaning and having a good clear out. It was while sorting out some junk I came across my PG Tips albums and the illustrated cards that I collected as a kid.

One character stands out from my albums and he was Emil Zatopek. Emil was from Czechoslovakia and known as the ‘Bouncing Czech’ or the ‘Human Locomotive’. His most impressive feat was in the 1952 Games in Helsinki and in a single week he won gold in the 10,000 metres, 5,000 metres and marathon. The most amazing fact is he had never run a marathon before and only decided to enter at the last minute!

We don’t have any Olympic Games on at the moment but we do have the 2022 World Athletics Championships taking place at Hayward Field, Eugene, Oregon. The events take place up until the 24th July and can all be viewed on the BBC player.

The Monday lunchtime session (18th July) with Tamsin is cancelled due to the forecasted heat. The lunchtime group will then break up for school holidays, returning in September.

There may not be the full range of groups available for the Monday evening either as some leaders may be avoiding the heat.

Leaders who are available will plan a sensible route, the pace will be slower than usual and the run may be shorter.

All runners should think carefully about the heat, you shouldn’t run if you have any health issues. You may want to drop down a group if you run in a group that really challenges you. If you don’t feel comfortable running in the heat then don’t, there is always next week!

Jim also echos the advice about being cautious when running in extreme temperatures. He reminds us that when you sweat you lose fluids and minerals and both need to be replaced.

A new venue and new course for this well established race organised by Thornbury Running Club. Now switched to Oldbury On Severn the course features the infamous starting climb up to Cowhill.

There was a good turnout of Westbury runners looking for points in the club championship. James Harrod, now back from his training camp in Kenya, was straight into the lead and held it the whole way. 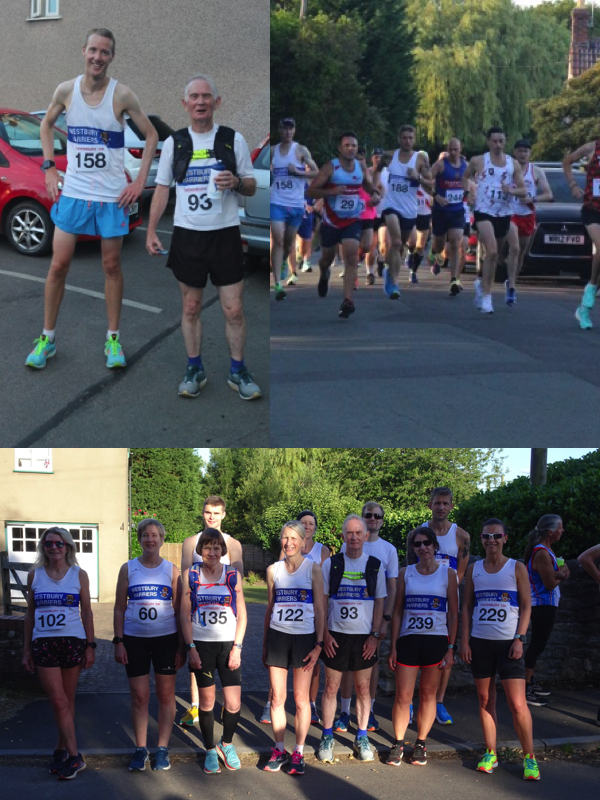 Behind him Alec Sampson, Jack Derrick and Chris Palmer were at the front of the chasing pack – with a strong contingent of Westbury women including Sophie Voller, Kate Hoffen, Judy Knights, Sandra Williams and Ann Lovell chasing category places.

Carolyn Dent and Kay Ridgwell were battling the hill and heat but finished strongly.

Great to see Westbury legend Mike Harris in action and looking in good form. Alastair Blackwood used the race as the run section of his own duathlon with 10 mile cycle to the race and 10 mile cycle home – awesome stuff !

Mike has reminded me that the Avon Road Relay Championships take place at Cleeve Cricket Club on Sunday 28th August (which is the bank holiday). 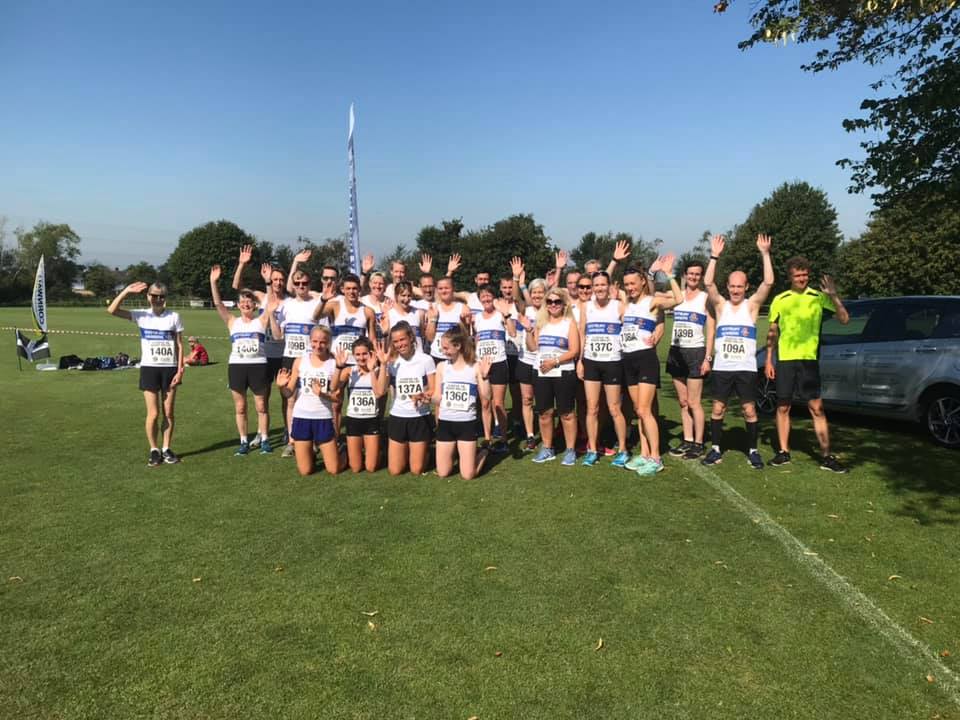 Pictured above are the runners from the event in 2019

The club plan on entering as many runners as possible in all categories and entries are paid for by the club. If you are interested in running send me an e-mail (including your age category) and I’ll forward your details on to Mike Mewse.

Some impressive running for the final event of the series at Eastville Park. In second place we had team Scrambled Legs with Finn Goodhew (and Tariq Kurd and Ollie Robertson-Kurd from Bristol and West) scoring the fastest leg on the night (possibly a course record?) in 4:42.

Team Robin consisted only of Robin Phillips meaning he had to run all three legs but still came 11th overall.

Pick n Mix were made up of Debbie Hunt, Kate Hoffen and Jay Hunt who came home in 16th but with a 1st place category win. 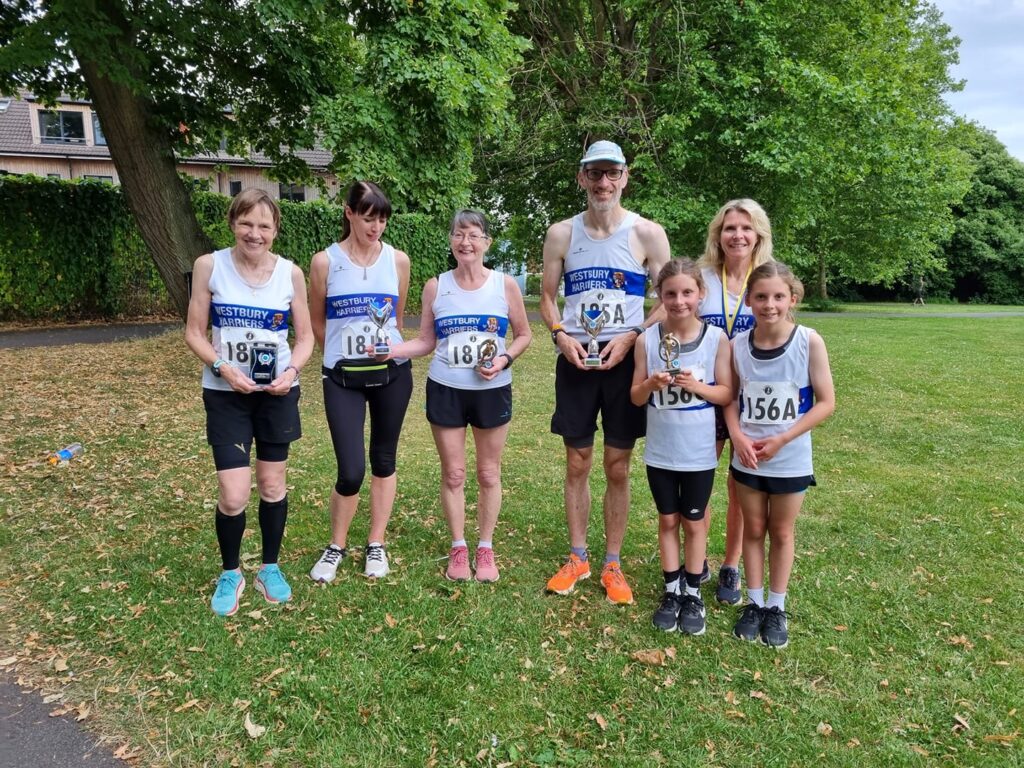 The Simpsons were made up of Darcy, Corinne and Lola in 21st place. 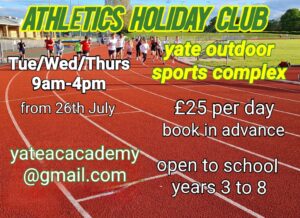 Starting from Tue 26th July and going right through the holiday. Tue and Wed will be days of coaching and learning different age related events. Thursday will be a day of fun activities and friendly competitions. If you are interested contact Yate AC on details below. Yateacademy@gmail.com

Last week it seemed most of the Monday evening running groups were in a selfie mood! I think most groups have been captured below from groups 3 to 5. Perhaps later on we can add group 1, 2 and 6 to the collection? 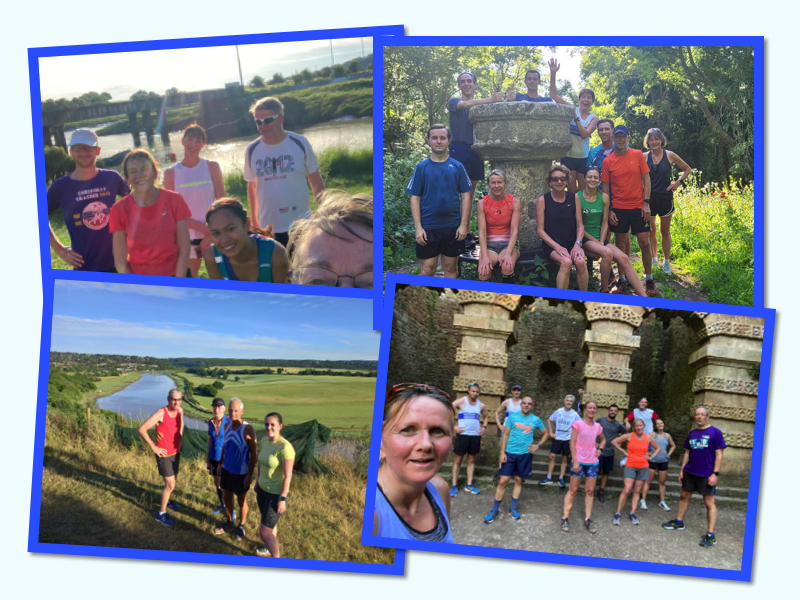 On your marks, get set and go!…..It was the Avon League at the Yate Outdoor Sports Complex last weekend with a few Westbury Runners representing our partner club, Yate and District AC. I arrived too late to get any pictures of Anthony Glover and Oli Beale (in the 1,500) but hear Antony was first in the vet men’s category with a time of 4:22:07 and Oli was 2nd senior man in 4:22:23. Emma-Jane Orchard and Tamsin Elson Chick were running the 800m and even dusted off their spikes for the occasion. Tamsin was third (number 117) in a time of 2:44:63 and Emma-Jane (number 183) was 7th in 3:05:88 (both pictured below) Well done to all. 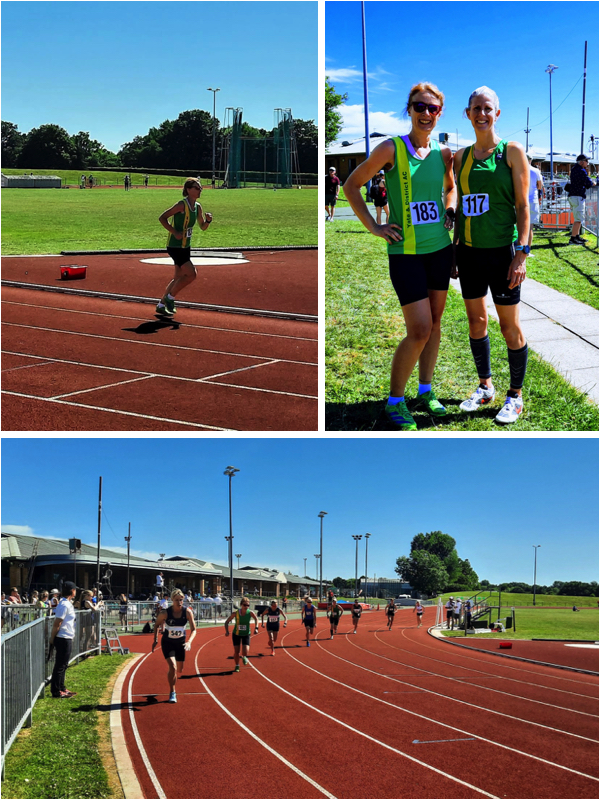 It may have been a very warm morning but that did not deter some of the Saturday morning runners that meet by the Water Tower on the Downs at 9am. A loop into Leigh Woods meant conditions were nice and cool in the shade of the trees although it was very hot as they ran back across the Downs. 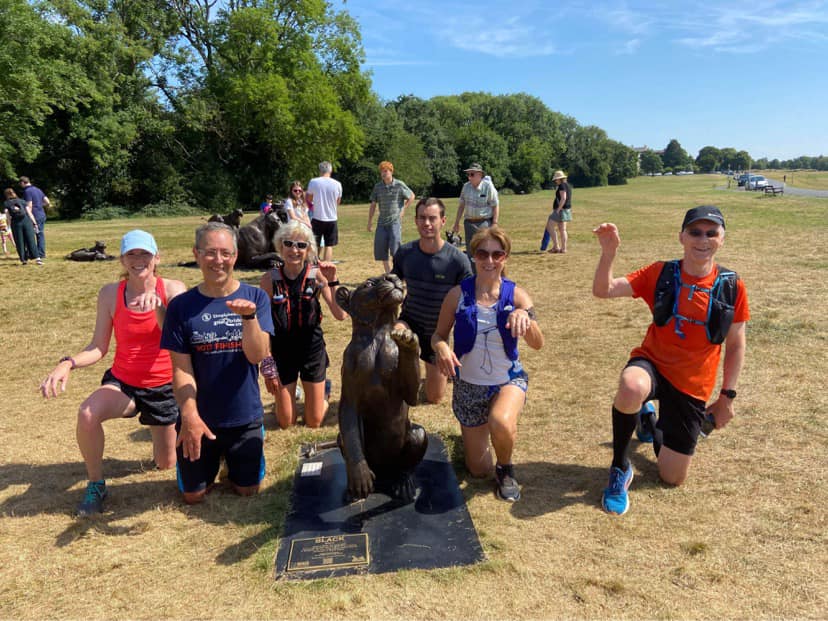 The main ballot is opening for registrations at 08:00 on Friday 1st July. The ballot will remain open until 23:55 on Sunday 17th July. After this time no further entries into the ballot can be made. The ballot draw will be made on Tuesday 19th July.

If you are unsuccessful in the Main Ballot, they have a number of allocated guaranteed entries to ensure a good Westbury turnout in this local event!!

Details of how you can apply for these entries, if you are unsuccessful in the main ballot, will be posted after the ballot draw. Link to ballot below. https://www.sodburyslog.co.uk

Important Note: Please be aware that the Gwent League will be taking place at Blaise Castle on Saturday 12th November and the club will be hoping for a good turnout of runners.

Well done to David Martin on his morning run and coffee stop with Pete. David achieved two Personal Records on his 14km run including Strava segment French Bridge to Gill Ave in 2:22 and Pearces Hill, Frenchay in 1:15

Sunday 24th July The Age Grader, Oldbury. Overall positions (and prizes) will be based on age-adjusted times and not actual time .This event is also suitable for anyone looking to gain a PB on the flat 5 mile course.
This event will we feel will attract seasoned racers and so we are not providing a medal but instead: hot drinks and cakes, a beer, a banana and a sports drink for all. https://www.sites.google.com/site/roguerunsevents/home/our-events/age-grader

Saturday 24th September, Uphill to Wells Relay. An off-road relay race starting at Uphill beach and finishing at Wells Cathedral. The route is 90% off-road and follows the West Mendip Way along footpaths and bridleways. The race is a ‘hand-over’ relay, run without marshals, water stations or other assistance. Teams are responsible for their own safety and for researching the route although their progress will be monitored at check-points at the end of every leg.https://www.uphilltowells.com/default.aspx 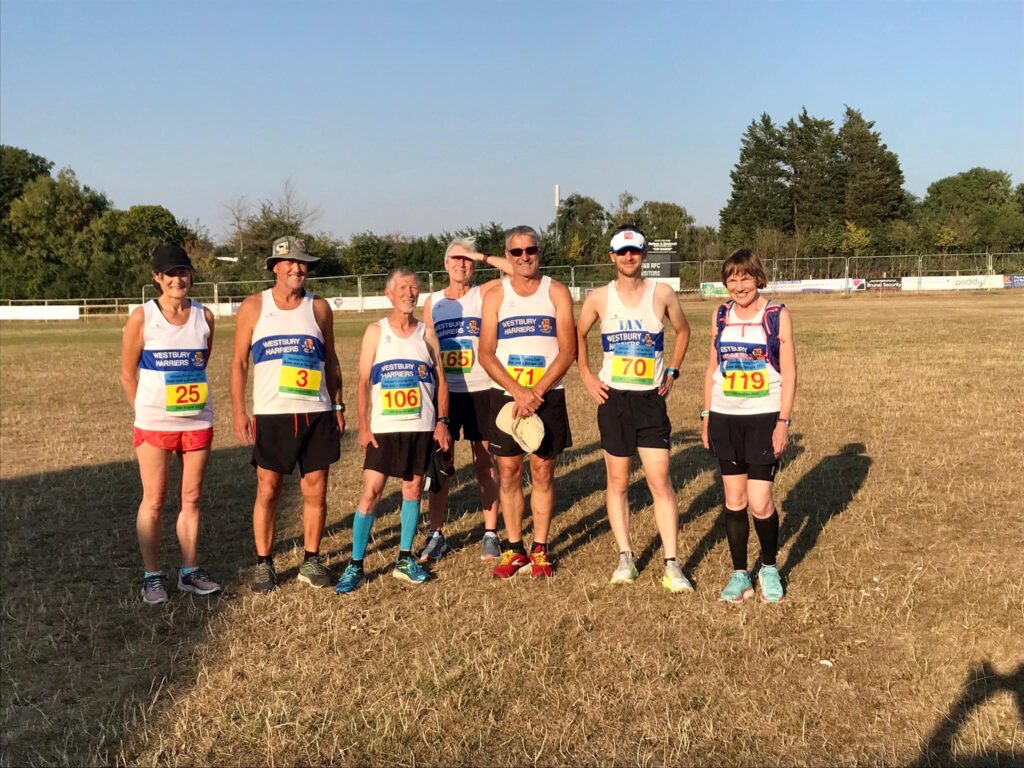