Monday Evening Training – be Visible. I received a telling off from Lizzy on Monday night and rightly so! There I was dressed entirely in black, not a good idea when the nights are closing in fast. So for next Monday it’s time to dig out those fluorescent bibs, T-shirts and running lights. Probably not long to go before it’s time for long sleeves, gloves and hats as well!!

Couch to 5k.  Just another reminder that the club are keen to have members support and encourage participants of the Couch to 5k programme. All you need to do is turn up on a Monday and/or Thursday and run with the group, providing them with encouragement and making them feel part of the club. If interested please contact Lizzy first: coaching@westburyharriers.co.uk.

Funny Money. Once again I’m disappointed to reported on club nights we’re collecting foreign currency again, such as Denarii, Zlotys, Kroner etc. I’m sure you’re all concerned that come 31st October we’ll no longer be able to leave these shores, but that’s no excuse for dumping foreign change in the collection boxes.

Volunteers: Website Manager. This is a big cry out to anybody in the club who has some experience of websites and IT who’s willing to support the Westbury Harrier website. If interested speak to the committee or e-mail secretary@westburyharriers.co.uk.

Member of the Month- Senior. He’s the King of the Curly Wurly, Finder of the Cake Batton and has the lightest and fastest running shoes in the club! Yes, Chris Palmer is our senior member of the month. Chris has trained and raced for the club over many years so is a deserving winner. This year he’s competed in the Towpath 10K Mob Match, Oldbury 10 Miler (3rd in category), Avon 5k Road Relays (winning V40 team), Seaview 17, Pomphrey 5K Mob Match, British Masters 5K Sutton Park Relays, numerous Parkruns, the list goes on…..Well done Chris.

A thumbs up from Chris at the Seaview 17 (which is actually 21 miles long). 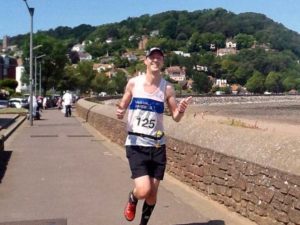 And because we missed last month we’ve another winner, it’s Ken Lovell. Ken’s out with the club training most evenings, a regular of the Saturday Water Tower runs, a Feel Good Friday runner and a keen competitor. He’s also very encouraging to all our club members. And Ken does not mess about with 5k’s, 10k’s or even Half’s. Marathon’s and Ultra’s are Ken’s specialism, for example he’s raced the Ham and Lyme 50k Ultra, the Beachy Head Marathon (to says this is hilly is a massive understatement) and the Green Man Ultra. I would not even attempt to run the distances Ken achieves, and I’m a few years younger. An inspiration to us all!

Pictured below, Ken after the Ham and Lyme 50k Ultra (Ken on the left). 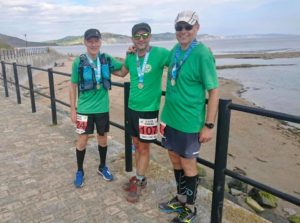 Junior nomination winners will be announced in a fortnight.

Editors Notice: I’ll be on holiday next week, visiting family in Denmark, so no news next week. Normal service will resume on Monday 23rd September.

Congratulations. Race report provided by Mike Mewse.
Nigel Gates has been out running in the Swiss Alps where he took in a couple of races. He was 10th in an 11k race in Leysin which took 56 minutes (6k up, 5k down) and then took 74 minutes to complete the Trophee des Combin which finished at 2700 metres. He was only 4th over 60 against the local mountain goats. Returning to the UK he came 3rd overall in the Bridport Runners Jurassic Coast Run where the Thorncombe Beacon was barely noticeable after being in Suisse.

He is hoping to qualify to run for England in the Telford 10k in December as the representative race will be next year’s Bristol 10k. After that he will be returning to the Alps in the summer. Any Harriers’ interested in joining him can email Nigel: nigel.gates1@outlook.com 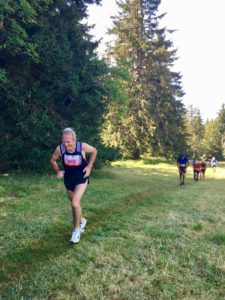 Interesting Fact of the Week
Women were excluded from the Boston Marathon until 1972. But that didn’t stop them. In 1966, Roberta Gibbs hid behind a bush and jumped out to complete the run and finished “unofficially” in 3:21:25! She was the first woman to complete the course.

Saturday 21st to Sunday 22nd September. Colin’s Coast path Run Weekend (Anglesey). Continuing along the Welsh Coast from Llanfairpwll to Malltraeth (have I spelt that correctly!) on the Saturday and Four Mile Bridge on the Sunday.  Coast Path Link

Saturday 7th December. Gwent League Event: Blaise Castle, Bristol.  As a club we host this event and it’s on familiar territory, so you have no excuse for not attending.

Thursday 19th December. Western Prom. A 5 mile race, up and down the promenade front. Affiliated only £6. Usually, a post race Christmas meal is organised as well, check for details nearer the time.

New Club Championship Event:
Thursday 26th December Clevedon Boxing Day Race. I’m always away over Christmas so have never been able to run this. I can tell you it’s a 4 mile race and a good excuse to burn off those excess calories from Christmas day lunch. Last year the first three Westbury finishers were Joe Conners, Ben Rawlins and Robin Phillips.