June results round up – not too hot to trot

It’s hot. Very hot. And the football’s been on, every day. But that’s no excuse for missing training, putting your feet up and “hydrating” with a cold beer. So plenty of Westbury Harriers have continued racing, even as the sun beats down and football comes home (until England go out).

The month got off to a cracking start with a sold out Blaise Blazer on a warm evening at our summer training home. The organisation and marshalling was flawless as always, and the cakes were exquisite. With a large Westbury contingent in a field of 165 starters, there were also some very good runs. Oli Beale finished 2nd, the first of no fewer than 10 Harriers in the top 20, with Hannah Hobbs 10th overall and the first female finisher. Richard Noble (13th) was the 1st V45M, and not far behind were Katie Hughes with an excellent run for 2nd female overall and 1st V35 female, Ken Ham as 1st V55 and Ellie Hobbs as 3rd female. Congratulations also to Helen Kershaw as 1st VW65. The home club also comfortably won both the male and female team prizes.

This is a tough one, involving running up, down and across a big Mendip hill several times in baking heat. Several Harriers took part, picking up Club Championship points. Said Ian Gawinowski:

“There are fantastic views from the top of Beacon Batch in all directions, unfortunately I got to see very little. I was either too busy focussed on my feet while slogging up hills or watching out for rocks on the descents. The final hill was so steep you could have rolled a Double Gloucester cheese down it! It was challenging, physically and mentally, but very rewarding. Some great results for the Westbury women. Jane, Sandra and Sophie achieved 2nd place in the team award, very impressive considering the high number of runners from other clubs. Sophie also had the honour of third place female (1st in her age group). Well done to all the Westbury runners.

Westbury Harriers don’t just run on roads, trails and hills. Both adults and juniors run several laps around running tracks too, in open events and junior league and regional championships.

Thanks to Mike Mewse for report and pictures:

Dalis Jones ran another good race (just outside PB in 4.45) with brother Ceredig setting a new PB of 44.3 in the 300m. There was another PB for Rhiannon Torrington with a 2.17 time for the 600m and those prolific racers Aidan Noble and Rich Noble were on the track for the 3,000m.”

For those who don’t know about this, and want to aim for a 5K PB, every year Bristol & West organise a sequence of 5000m track races with pacemakers, and chip timing which includes the split times for every lap. The paces range from 20-22 minutes in the “G” race, all the way to the sub-15 flyers in the “A” race. In the words of Mike Mewse:

“Another great evening of racing organised by Bristol & West AC – their second event in four days. Well done to our Westbury Harriers track runners especially our Vet Men runners who all recorded PBs. A great performance from V40 Robin Phillips in an excellent 17.35. Rich Noble (V45) ran a superbly paced 18.03, closely followed by Ewan Paton (V45) 18.06. James Harrod (U17) ran a PB of 17.06 with Aidan Noble U20 in 17.16 and Joshua Morland coming back from injury to record a very respectable 18.52.” 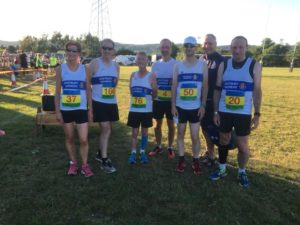 This is a friendly country road 10k near Nailsea rugby club. You get a free beer (or equivalent) and sausage bap when you finish. In the words of prolific racer and reporter Ian G again:

“The Nailsea Festival Beer and Banger 10K Results: Goodness, it was hot! The sun was beating down incessantly as approximately 160 runners pounded around the hot lanes of Nailsea. All I was thinking about was that nice cold pint of cider afterwards…Even though the weather was scorchio the Westbury runners went hurtling around the course with the following results:

As well as the open track meeting described above, several juniors have been in frequent action on the track this month. Very well done to Abdi Hasan, Dalis Jones and Hannah Hobbs for their performances at the Avon and South West Schools Championships, through which they have qualified (in the 800, 1500 and 3000m respectively) for the South West team in the English Schools Championships in Birmingham on 13th/14th July. Well done to all other athletes who competed at Exeter, including Rosie Hamilton-James for a 10:48 PB in the 3000m, and Emily Whitaker for a 5:34 PB in the 1500m steeplechase. 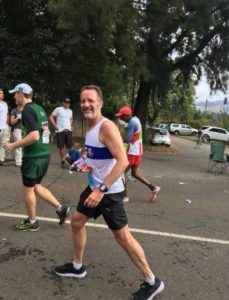 Finally, if 5ks, 10ks half and full marathons aren’t quite enough for you, how about 55 miles/90k across South African hills?

Very well done to Ian Smith (V50) who flew the Westbury flag in this world famous event, and completed it in an impressive 11h 48, not too far behind South African winner Bongmusa Mthembu (5:26). In Ian’s own words:

“Westbury were well represented at this years Comrades Marathon in South Africa (by well represented, I mean I was out there for a LONG time! ) it is a tough race. I recommend it, but you need to put in the big miles – something I failed to do! Loved it, though – the atmosphere is incredible and the hospitality amazing.”

Well done to all, and keep the results coming.