Not bad for a little North West Bristol club (with some help from the League). Major sporting event put on and run like clockwork – tick. Traffic and parking chaos avoided by careful planning, stewarding and re-direction. Even the dozens of Santas on motorbikes couldn’t disrupt it. Courses all set up perfectly, and races all started, marshalled and finished without major incident. The weather behaved itself too. Huge credit is due to Robyn Ellis and Neil Miller, and the 34 volunteers who contributed to a highly successful and enjoyable day.

And of course, there was some excellent running too. Neil counted a total of 125 Westbury vests, young and older. The message clearly got through, especially to the men, with a whopping 28 runners including several debutants. The 31 women were equally impressive, even with a few regulars absent. The Gwent is all about participation, and we had that in spades. Blaise is a slightly different proposition in midwinter, with muddy trails and heavy ground making for a challenging course in all races. Everyone seemed to enjoy themselves, and there was a fair bit of success, too – starting, as usual, with the juniors….

Coaches and parents are fast running out of superlatives for our girls, who continue to dominate most age categories. Equally impressive in this round was the improved turnout. Every runner counts, and in some groups their points could be crucial in the final reckoning. 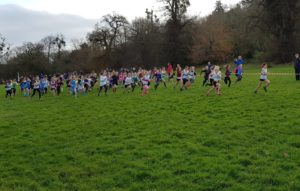 Estelle Lowe secured another impressive Novices victory, by a full 12 seconds, to take top spot in the tight overall standings. Not too far behind her there were good runs from Megan Troughton, Lillia Killourhey, Aoife Joyce and a fine Blaise debut for Miranda Rogers. The team are 4th overall and still in with an excellent chance of medals with two races to go.

In the U13s, Laura Chance just missed out on a 3rd straight victory, but still ran superbly for her second place. Behind her were an incredible 15 further Westbury girls. Elen Ruck (8th) and Felicity Lowe (10th) were next home, closely followed by Corinne Jones, Jasmine Spear and Erin Davis. Great runs also from (here goes..): Maeve Robinson, Elizabeth Russe, Martha Owen, Molly Smith, Sophie White, Ella Fellows, Connie Ellis, Isabelle Lee, Kate Murray. Wow – our girls represented 23% of the field! With numbers like that, it’s no surprise that the “A” team leads the way by a good margin, with enough left over for decent showings by B, C and even D teams.

Great numbers and results also in the U15s, with 2 in the top 10 – Amelia Honor 2nd, and a superb run by Abbie Woodworth in 10th, her best of the season. Behind them, well done also to team runners Hannah Jones, Eva Ward, Katie Ramsden, Jessica Lee and Hannah Clark, contributing to good standings for both A and B teams, with the former 3rd on the day and standing 4th overall.

Rosie Hamilton-James continued to boss the U17s, with her second successive victory, by an impressive 27 seconds over team mate Kate Howard in 2nd. Rhiannon Paton followed in 9th, and – hurrah! – they had a full scoring team out for the first time this season, with debutante Dara Toogood putting on an impressive sprint finish (in the new Westbury/Chelsea FC colours) to secure 16th. That ensured that the team top scored on the day, and also drew closer to overall leaders Cardiff AAC. 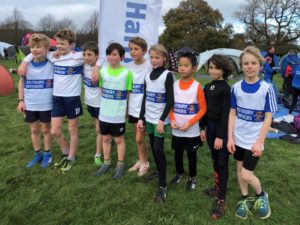 “Another great performance at the Blaise  Cross Country for the ‘novice’ u11 boys. A very strong performance from all who competed, with 4 of the team finishing in the top 15. With two notable absences the team could have had 6 finishers in the top 17!

The team’s efforts will keep them in contention for being in top spot at the end of the season although Carmarthen will push them all the way. We are now focusing on the last two remaining races…”

Very well done to all boys who took part, with Daniel Pemble leading the way in 4th, and strong support and good packing from Charlie Walford, Patrick Croucher and Tom Woodworth (11th, 12th and 15th). Good running also from Seth Evans, Harry Hodgson, Joab Harkness-White, Daniel Coward and William Peng, enough to put both the A and B teams high in the standings.

It was also great finally to get some good numbers in the U13 boys, with Theo Hester first home, ably followed by Edmund Croucher, Seth Harkness-White, and (with their best runs of the season) Owen Joyce, Finley White and Oliver Wilson. The increased number of runners resulted in an impressive 10th out of 33 teams on the day.

Seamus Robinson continues to have a great tussle with his Carmarthen rival in the U15s, narrowly pipped into 2nd this time but still nip and tuck in the overall standings. Immediately behind Seamus in 3rd, with his highest ever Gwent finish after a superb run, was Artie Savage-Swaine, closely followed by Finn Goodhew (11th) and Jack Powell (17th), to make the A team top scorers on the day by a massive 41 points. There were good runs also from George Peacock and Henry Skidmore.

Numbers have not been a problem in the U17s, where James Harrod continued his impressive recovery and return to racing fitness by leading the lads home in 11th. There has been some great packing and healthy competition all season between Josh Morland, Tom Reed, Johan Hobbs, Ceredig Jones and Alexander Wilson, all separated by only 7 places in total. A brave run also from Tom Peaston, surviving injury and availing himself afterwards of the excellent St. John’s Ambulance service. Well run also to Charles Hall, Chris Page and Louis Dubicki – fantastic to have 10 runners in this age category wearing the Westbury vest.

Well done also to Ben Rawlins (6th) and Greg Hayward (9th) , who ran well against some swift students in the U20s, and tough luck to Abdi on his injury withdrawal. 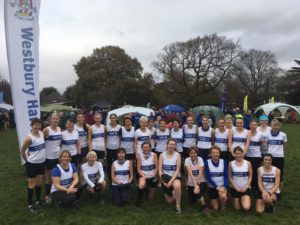 “Thank you to the 31 wonderful ladies who turned out for the Gwent League at Blaise. It makes such a difference to the teams and age group scorings to have so many take part. Well run to you all.

A special mention and welcome to those running the Gwent/or for Westbury for the first time, with some impressive debuts – Rachel, Dawn, Nina, Patricia, Helen & Shona. 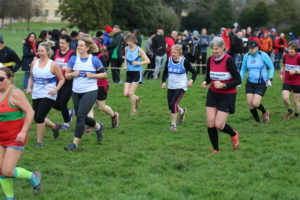 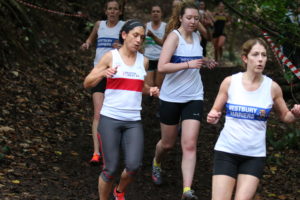 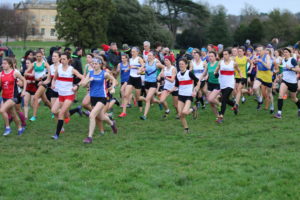 A particular well done to Helen who was on our latest to couch to 5km course. Couch to a cross country race is an impressive achievement.

Fantastic to see a return of Jane, Sandra & Clair, who all ran fantastically. Thank you to Jane for sharing her big birthday weekend at the Gwent, and well done to Sarah A who had her best Gwent run to date.

Team wise things are very close – please do have a look through the team standings as the next two fixtures are vital if we are to keep and move up into some medal positions.

There were 76 ladies teams at Blaise. 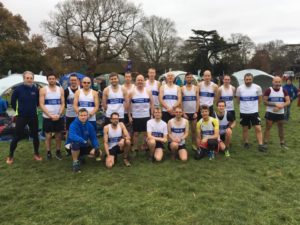 Well done, chaps. It may only have been on your doorstep, but you still heeded the call for greater numbers, across all age categories. In another massive field (467 starters), there were impressive and welcome Gwent League debuts for Tom Stott and Steve Emery amongst others. Top finishers, in 41st and 47th (just enough to bag the top 10% t-shirts!) were Alex Hamblin and Alan Uren, with Chris Palmer and Tom Gange not far behind in 67th and 77th. Completing the scoring six for the Senior Men were new ‘super vet’ Rich Noble in 137th and – with a massive Blaise XC PB and probably the most impressive run of the day – Alasdair Blackwood, who continued his recent great improvement to finish 151st, just 13s behind Rich. Those runs put the Senior Team 6th overall on the day, and kept them out of the relegation places in Division 1. 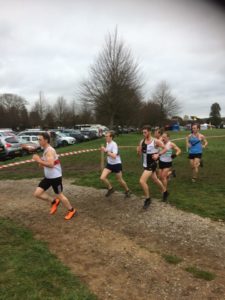 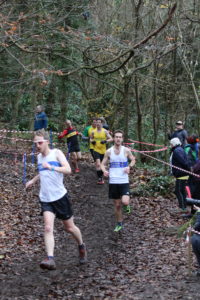 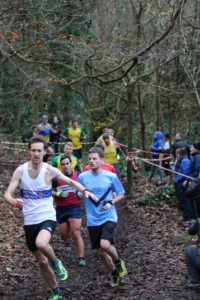 There were plenty of numbers, good runs and mini-battles just behind them, although sadly the League was deprived by injury of the 3rd instalment of the Geraint T/Ian Derrick duel, up there with Coe/Ovett for men of a certain age. Geraint took full advantage of his rival’s absence, in between his always impressive MC-ing duties.

“Great to see 28 senior / vet men run at the Gwent XC at Blaise. It must be our biggest attendance for quite some time. The team was led home by Alex Hamblin and also featured a number of runners taking part in their first XC, which was great to see. The results have boosted our position in the league although we are still in 10th, so let’s get as many numbers out as possible in the next two races.”

The vet teams maintained their good standings overall. The V45s ‘A’ were 4th on the day, out of 62 teams and remain 4th overall, only 38 points behind rivals Bristol & West in 3rd. The B team also ran well to finish 11th on the day. The V35s were 7th out of 80 on the day (11th overall), and the V55s 9th (6th overall), not far behind the medal positions.

Now there is a slight break in League action until 8th February 2020, when the action (hosted by Bristol & West AC) moves to Chepstow Racecourse, just 15 miles away over the old bridge. We hope to see plenty of runners galloping around on that occasion. The going will probably be ‘good to soft’, with lumps of sugar – or at least chocolate biscuits – for all competitors. You’ve got ‘neigh’ excuse for not going ..etc. etc. (insert your own equine jokes here). It sounds like it will be a well-organised event, with excellent facilities, parking, and toilets – and that’s just for the horses. But seriously, it would be excellent to maintain the high numbers from Blaise in all categories. See you there!

(Thanks to Jason, Colin, Vicky and Johnny Lam & Helen Perry of San Domenico RC for all photos, used with thanks.)