With unseasonally mild weather, firm sandy turf and trails, and a nice view across to the Gower once you’d scrambled up the sand dunes onto the ridge, Pembrey Park was almost the perfect venue for the third of five Gwent League rounds. It may have taken 2 hours plus to get there, and a further half hour to get in and parked, but a large contingent of Westbury Harriers young and old made the trip. It was well worth it. Everyone who ran seemed to enjoy themselves, many teams consolidated their leading or strong category positions, and the day was capped by multiple individual successes. The name of Westbury Harriers rang out constantly on the PA race commentaries, with some athletes even interviewed post-race. Spirits in the Harriers tent remained high all day, assisted by Geraint’s now customary lovely spread of drinks, cakes and flapjacks, impeccably presented on a folding table.

First mention and pride of place must go to Hannah Hobbs. In her first ever senior women’s race, she paced it perfectly before overhauling her main Swansea rival, crossing the line nearly 30 seconds ahead for a stunning victory. Not too far behind her, the women’s team generally put in a great effort to remain in 3rd place overall. In a strong field of 273 runners, Katie Hughes had an excellent and very quick run to finish in 11th place, while behind her were several clusters of Westbury women who enjoyed some great battles with each other around the scenic course. 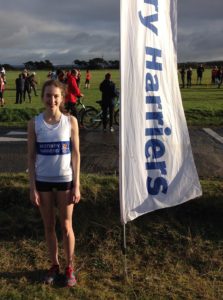 In the women’s team standings, as well as the 3rd place overall, Westbury are dominating the age categories, with the V35s, V55s and V65s all leading the way, and the V45s in 4th.

The men’s team saw a welcome return to competitive action for team captain Scott Campbell after a long spell out with injury. Scott had a great run to finish 32nd in another very strong field of 392 starters, just behind top finisher Oli Beale (22nd).

The team finished in a very creditable 6th place overall on the day, and remain on course to retain their position in Division 1. In the “vet” categories there is everything to play for in the final two fixtures, with the V35s, 45s and 55s in 6th, 4th and 4th respectively.

Junior participation was slightly uneven across the boys’ and girls’ age groups, with some categories very well supported but others less so. Every junior who travelled all the way there and ran deserved great credit (as did their parents and drivers), and also deserved the very generous club treat of a post-race toboggan ride!

In the girls’ races, the novices (U11s) continued their pattern of great numbers and even greater success. A strong group of 8 (nearly a tenth of the 90 starters overall) was led home by Laura Chance, who pipped a couple of Carmarthen Harriers to win the race by 5 seconds. Not far behind her were Elen Ruck in 5th and Zoe Bradbrook in 11th. Great running also from Steph Hamilton-James, Isabelle Hugill, Maeve Robinson, Felicity Lowe and Sophie White. The team are in first place overall out of 48 teams, and such is the strength in depth that the “B” team are in 8th.

The U13s were slightly depleted in numbers but Clemmie Lee, Meghan Porteous and Erin Pemble all represented the club with distinction, and even with a team of just 3 in this round they remain narrowly in 7th place overall. A full turnout in the last two fixtures will give them a good chance of a top 3 finish.

The U15 girls are dominating this year’s league, with Dalis Jones unbeatable and all set for another full house of race wins. Close behind her were the rest of an exceptionally strong team. Rosie Hamilton-James continued her very impressive form of this season to grab another 2nd place with a perfectly timed late surge. Kate Howard (5th), Rhiannon Paton (9th) and Emily Whitaker (17th) completed the picture, to leave the team just the 171 points ahead of their nearest rivals. Dalis, Rosie and Rhiannon also lie 1st, 2nd and 7th in the overall standings after 3 races.

We need more boy novices running, but very well done to solo Westbury Harrier Henry Watson, for an excellent run to finish 17th in a field of 102. Hopefully he will have some team mates to support him at Pontypool and Blaise!

Seamus Robinson won the U13s race at what seemed like a canter, but in fact moving extremely quickly to ease home a full 15s ahead of 2nd place. Like Henry, Seamus could do with more team mates, but credit to Finn Goodhew for making the journey and running well.

The U15s were another small but select team, with James Harrod and Johan Hobbs finishing 7th and 13th in a strong field of 60. James remains in close contention for the overall individual title, with only 7 points separating 1st from 4th place

The U17 boys have numbers and talent, with the team leading the way overall on the back of more fine runs. In a race combined with the U20s, Abdi Hasan was the first U17 boy home, followed by Aidan Noble (9th) Greg Hayward (12th) Fred Stewart (20th) Ben Rawlins (25th) and Hugh Tarren (28th). Well done also to solo U20 runner Ben Whitaker, 6th in that category.

The next race will also be in Wales, but not quite so far away this time – Pontypool on 11th February. The final race will be even closer to home, at Blaise Castle on 3rd March. If you, or your child, haven’t run in the Gwent League before, why not give it a try? Everyone is welcome, and every runner who completes the course scores points. Adults can enter on the day by giving £4 to their team captain. Juniors of all abilities and speeds are very much encouraged to enter – we only require that they let Neil (boys) or Simon (girls) know in advance, and it costs them even less. And the cakes are provided free. What are you waiting for? 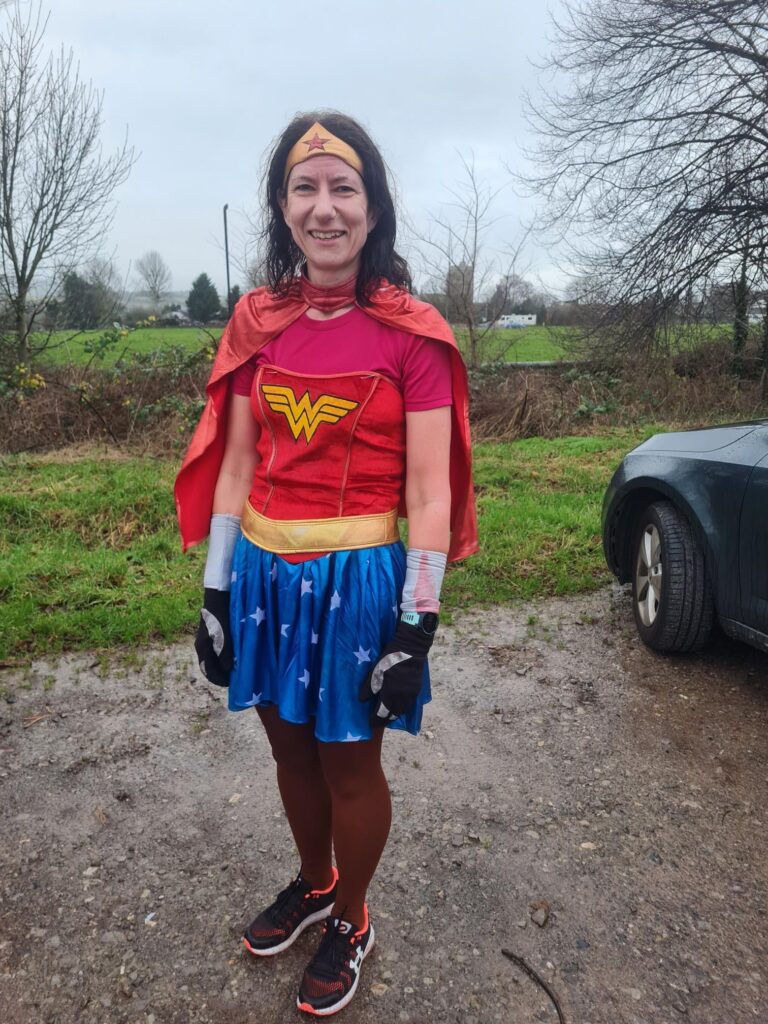 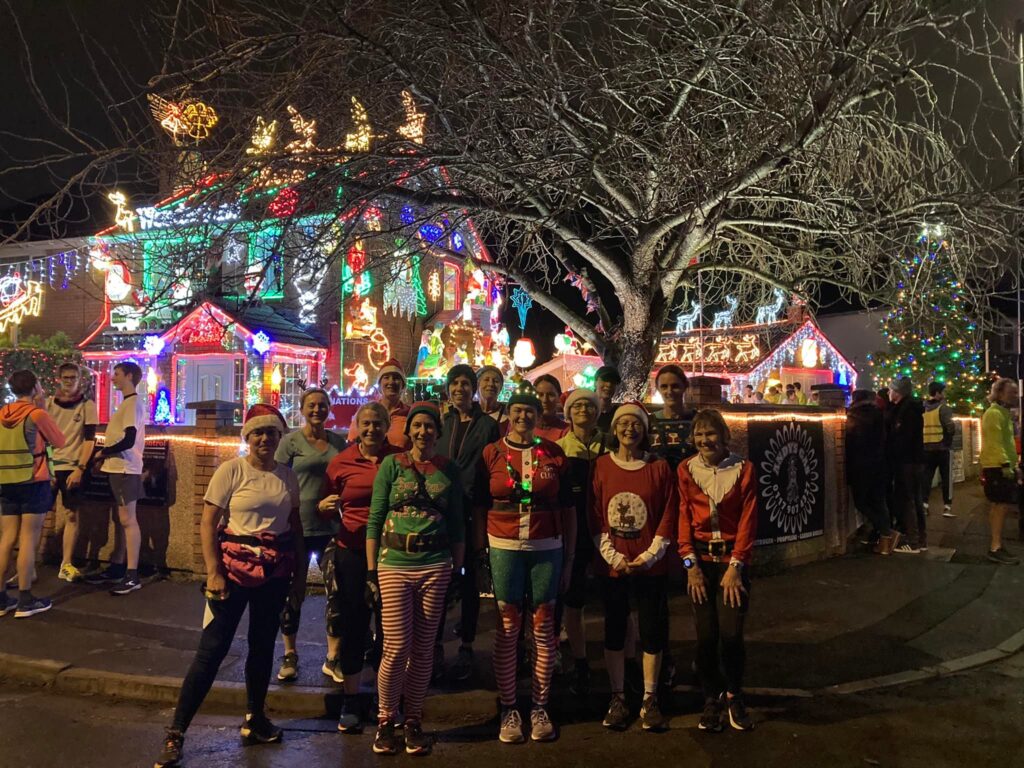