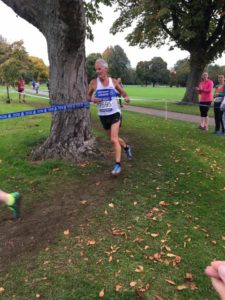 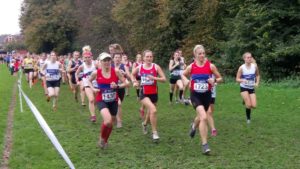 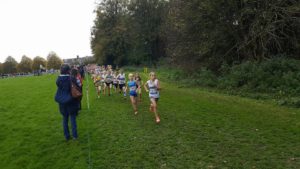 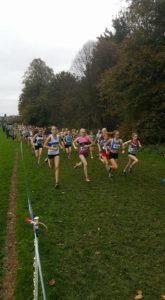 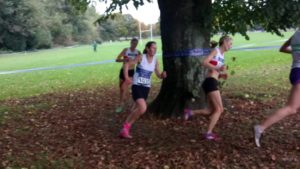 The 207-18 Gwent League got off to an excellent start at Llandaff Fields in Cardiff last Saturday, with some great runs from Westbury Harriers across all age groups. The race was combined with round 1 of the UK Cross Challenge, resulting in several elite athletes taking part. Some of the U15 girls even got women’s race winner and international star Jess Judd to autograph their race numbers! There was also a running commentary over the PA system, and a very large turnout on a mild day, generating a great atmosphere.

– Shirley Hume, who was 1st VF65 home
– Trish Robson, who ran superbly and finished 2nd VF55 despite having the same time as the winner!
At the team level, the Westbury Women ‘A’ are in a fantastic 4th place (out of 81 teams) after the first round, with the ‘B’ team not far behind in 11th.
The V35 team are in 1st place by 30 points after the great runs of Catherine, Katie, Kirsty, Jeni and Trish. The V55s and V65s also lead the way, with the V45s in 4th.

On the men’s side, the turnout was a little lower, but there were still some great runs over 3 laps of the course (just under 9K), in a very strong and congested field of 444 runners.

On the junior side, special individual mentions for:

– Dalis Jones, who continued where she left off last season and was 1st U15 girl (finishing 5th overall in the UK Cross Challenge).

– Abdi Hasan, who was narrowly pipped by 4s but finished 2nd U17 boy.

The junior teams showed Westbury Harriers’ considerable strength in depth. The U17 boys’ ‘A’ team lead the way, with Abdi ably supported by Aidan Noble, Greg Hayward and Ben Rawlins, respectively 11th, 12th and 14th out of a field of 60. Well run also to Hugh Tarren and Adam Kilgour for the ‘B’s.

The U13 boys are in 9th place: in addition to Seamus’s victory, well done also to George Peacock (24th), Soloman Scott (53rd) and Finn Goodhew (69th).

Boy novices (U11) were slightly thinner on the ground than the girls, but very well done to the two who did turn up and run so well: Finley White (37th out of 118) and Alex Auton-Green (48th).

The girls’ team had a good turnout in most age categories, and there were again some great runs.

Special mention must go to the ten (!) girl U11 novices who took part, some for the first time. There was a Westbury Harriers “2-3” in a field of 124, with Laura Chance (2nd) and Elen Ruck (3rd) running superbly for ‘podium finishes’ and large points scores. Not too far behind them were Jessica Hollingbey (17th), Zoe Bradbrook (26th), Steph Hamilton-James (31st), Felicity Lowe (33rd), Isabelle Hugill (74th), Sophie White (79th), Amelie Maycock (93rd) and Isabelle Lee (95th). Great and enthusiastic running by all – the future looks strong. The novices ‘A’ team lie narrowly in 2nd place after this round.

The U15 girls’ team had a small but highly placed group of 4 runners in the field of 88, whose collective performances were enough to put them in 1st place overall. In addition to Dalis’s 1st place, there were very strong runs from Rosie Hamilton-James (10th), Rhiannon Paton (16th) and Lottie Livesey (27th).

Thanks to all coaches, members, parents and families who contributed to such an enjoyable and successful day, and especially to Neil for wrestling with the results in addition to his club duties!

See you all (or at least several of you) at Brecon on 11th November!